Euronaval 2018: Airbus to Focus on Smart Solutions for Safer Oceans

From Shore to Sea to Space

Airbus will showcase a wide variety of smart solutions for safer oceans at Euronaval in Paris this week. The portfolio presented will range from maritime awareness centres, secure seamless communications services, through satellites and related services, to unmanned aircraft systems (UAS), aircraft and helicopters. The company’s broad maritime portfolio enables customers to make the right decision and act at the right time, capitalising on 50 years of experience in the maritime domain.

Airbus helps to improve maritime awareness with its large fleet of Earth observation satellites. The massive amount of data they acquire daily, combined with additional information sources including automatic identification systems (AIS) and predictive analysis, allows for a comprehensive maritime picture to the benefit of operational users at sea or ashore. Examples of this will be demonstrated at the company’s Smart Maritime Centre at Euronaval.

Additional intelligence can be provided by drones, such as the electric-powered ALIACA UAS, with flight endurance of three hours and 360° panoramic coverage from its new gyro-stabilised vertical turret over a range of 10-150 kilometres. Ideally adapted for maritime missions, it is catapult-launched and uses a dedicated net landing solution to perform intelligence missions ahead of the parent vessel.

Another solution on offer is the High Altitude Pseudo-Satellite (HAPS) ZEPHYR platform. Running exclusively on solar power and flying above the weather and conventional air traffic, this system is complementary to satellites, UAS and manned aircraft. Ideally suited for ‘local permanent persistence’ intelligence, surveillance and reconnaissance (ISR), ZEPHYR has the ability to stay focused on a specific area of interest, which can be hundreds of miles wide, while providing satellite-like communications and Earth observation services over several months without interruption.

Airbus will also be presenting its range of solutions for naval communications: mobile in and around the ship, fleet secured intranet networks such as RIFAN, high throughput Ka-band satellite naval segment such as COMCEPT and military satellite communications SCOT terminal. These solutions enable crews to connect and maintain secured point-to-point communications and Beyond Line Of Sight (BLOS) communications anytime and anywhere. They are already in use by modern armed forces worldwide, notably the French and British navies.

Based on the experience of 34 maritime patrol C295s delivered to six nations, Airbus is now proposing the C295, an ideal aircraft for ISR, border control activities and homeland security operations when fitted with Airbus´ proprietary mission system Fully Integrated Tactical System (FITS). The C295 is also available in a tactical range anti-submarine warfare (ASW) version, already in service with the Chilean Air Force.

In response to the market, Airbus has started a self-funded design study on a new programme, the A320M3A, a variant pf the A320 platform that would be designed to fulfil a range of ISR roles, particularly long-range maritime patrol and ASW.

Airbus not only meets today’s military requirements with successful helicopters such as the NH90, but is also paving the way for aircraft that meet tomorrow’s needs, with the H160M and the VSR700. A scale model of the NH90 NFH, a helicopter that can operate from shore or warships and that is tailored for full capability in both ASW and anti-surface warfare, will be exhibited. A scale model of the VSR700, the unmanned vertical take-off UAS designed to fulfil the demanding requirements of global navies, will also be on show, and a full scale mock-up of the Airbus-Naval Group future Navy Airborne Drone System (SDAM), based on the VSR700, can be seen at the French Ministry of Armed Forces stand, alongside a scale mock-up of the Navy version of the H160M that was selected under the Hélicoptère Interarmées Léger (HIL) programme. A new generation aircraft, the H160M will provide the French Armed Forces with a modern, high performance helicopter that has a low logistical footprint and that will be operational for the next 30 years. 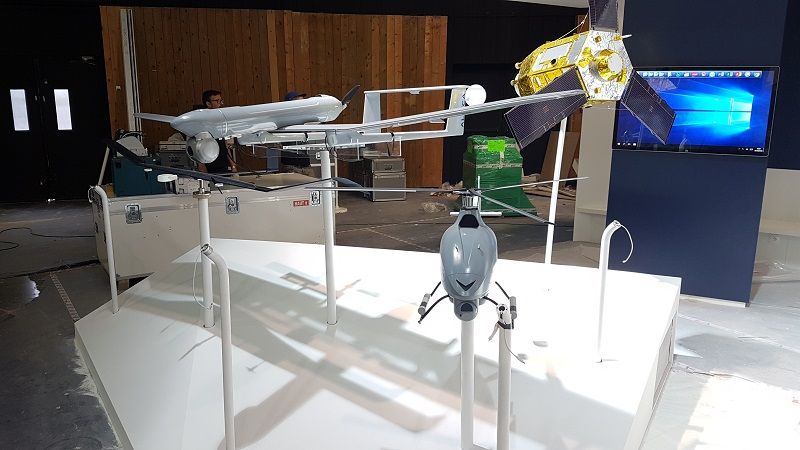