Embraer Defense & Security has signed a technical co-operation agreement with the Brazilian Army, which will see the partners collaborating on evaluation studies intended to inform the design and development of an artillery counter-battery radar system.

The work will build on experience the company has gained working with the Brazilian Army on the country’s SISFRON integrated border monitoring system and the Army’s strategic anti-aircraft defence programme. As well as outlining technologies and operational concepts, the studies are intended to identify whether radar work already undertaken by the Army’s technological centre may meet requirements for the new system.

“With this agreement, we will expand Embraer’s expertise in research and development of the radar and ground systems field, including sensors and their civilian and military applications,” commented Embraer Defense & Security President, Jackson Schneider.

“In recent decades, the fruitful partnership between the company and the Brazilian Army has consolidated strategic knowledge in radar and border surveillance systems for Brazil,” the head of the Army’s science and technology department, Gen Guido Amin Naves, added. “As a result of this joint effort, Brazil now belongs to a group of countries that master radar technology and manufacturing. We are sure that this cooperation will allow us further existing initiatives, perpetuating knowledge, retaining technologies, and expanding strategic capabilities.” 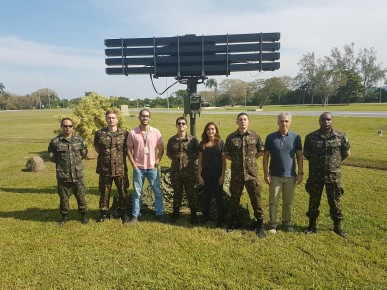 Embraer has been making steady progress in radar of all descriptions in recent years. (Photo: Embraer)