Elbit Systems and its partner, Israeli unmanned specialist Roboteam, have announced a new UGV – ROOK – described as a high-mobility, multi-payload, all-terrain 6×6 vehicle with an interoperable open architecture. It has been designed for military applications, including logistics, intelligence-gathering and medical evacuation missions, and offers greater capacity and improved manoeuvrability over rival systems.

A media release states that ROOK is “based on the operational experience accumulated through fielding of the [Roboteam] PROBOT UGV systems in several countries, including the US, France, Israel and the UK.” Despite this, ROOK was “designed from scratch,” and has a modular structure to enable replacement of components without needing to return the vehicle to a maintenance facility, or requiring any specialist technical staff.

The TORCH-X robotic and autonomous application gives the vehicle the capability to autonomously navigate in rough terrain and at night, and to operate as a remote weapon system. When remote or autonomous control is not required, the system can be operated via Roboteam’s ROCO-7, an all-weather seven-inch ruggedised display unit. This allows one operator to control several unmanned systems. The 1,200kg vehicle is capable of carrying its own weight in payload, and can operate for eight hours on a single charge of its on-board batteries, at speeds of up to 30km/h: its endurance can be extended with an optional internal generator. 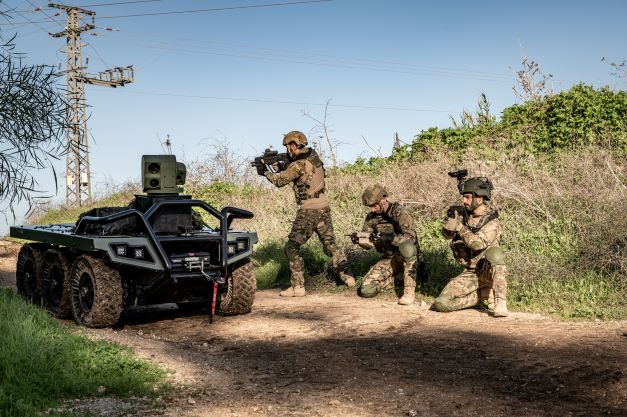 An example of the ROOK vehicle operating with dismounted troops. (Photo: Elbit Systems)