The Salvadoran Air Force (FAS) has received four MD530F helicopters donated by the United States, three of which will be sent to Mali to replace the MD500Es the FAS operates there in support of the UN operation.

The force is also finalising purchase of a new Bell 412EPI, approved since 2020, for $11.5 million, and is negotiating funds for procurement of another 412EPI – a manufacturer’s demonstrator – for approx. $7 million. This second example had initially been requested by the National Civil Police (PNC) after procurement of a Bell 429 was cancelled, but no valid guarantees were presented for financing and the purchase was stopped. The FAS then suggested it could make the purchase. The PNC has also requested the UH-1H that it owns be upgraded to the Huey 2 configuration, an operation criticised by opposition politicians who contest the $5 million budget, saying $1.5 million is more realistic. The project is currently halted.

Should both new Bell 412s be procured, the FAS would have four Bell 412EPs (one of them presidential and modernised) and two 412EPIs. The force is also in advanced negotiations with Airbus Helicopters for the purchase of six H145s, at approx. 8 million each, to replace part of the Bell UH-1H fleet still in service.

For training, the purchase of an additional Schweizer 300C, plus spare parts to refresh part of the six-aircraft fleet (of which only two are operational), is also being negotiated. In the fixed wing domain, The FAS has ordered two new Cessna 208EX Grand Caravans, which are soon to be received, with two more on option. These aircraft will enable expansion of the transport fleet, today almost exclusively made up of the IAI Arava, since the Basler BT-67s are out of service.

In addition, to replace the old SOCATA Rallye, the FAS is managing the purchase of three new Cessna 172 Skyhawks. 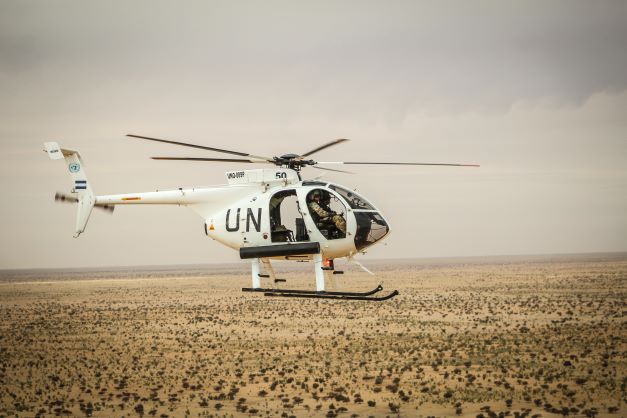 An MD500E currently used by the force in Mali, to be replaced by three MD530Fs. (MINUSMA)