EFES 2018, one of Turkey’s biggest military exercises, in the Aegean province of Izmir features live-fire military drills plus more, and will end on 11 May. Among the defence equipment on display is the BAYRAKTAR Tactical Block 2 (TB2) unmanned aerial system (UAS), of which TSK has so far commissioned 34, of which 23 were modified to carry munition (e.g. Roketsan’s MAM-L and MAM-C smart munitions). It can carry payload up to 150kg and is capable of flying uninterruptedly for 24 hours. It also boasts an altitude record of 27,030 feet.

The exercises, hosted by Turkey and administered by Aegean Army Command, are carried out in Western Anatolia, the Central Aegean region, the Gulf of Izmir and the Doganbey Live Fire Drill Zone. Military units from the Azerbaijan, Bahrain, Bangladesh, Bosnia-Herzegovina, Georgia, Italy, Qatar, Saudi Arabia, Kazakhstan, Kosovo, Hungary, Macedonia, Mongolia, Uzbekistan, Pakistan, Romania, Slovakia, the UK and the US are attending.

Otokar exhibits its latest armoured vehicle, the COBRA II Load Carrier Armored Vehicle, developed for secure delivery of vital materials, including ammunition, fuel, food and water to troops during operations and to military bases. It has great manoeuvrability with the capacity of carrying 2.5t of load. The vehicle will be able to respond during day and night, in challenging terrain and climate and in different operational areas. The vehicle also provides close protection and self-defensive firepower facilities with its anti-aircraft gun that can be mounted in its chassis. The vehicle can reach up to 110kph, has a 700km range and can operate with 120mm mortars as well as other 5.56mm and 7.62mm weapons.

PADMER, a blast-resistant modular shelter, will also make its official debut at the exhibition. Built by OFM Engineering, the shelter is resistant to vehicle-borne improvised explosive devices (IED) and similar explosives. Its modular structure enables easy transportation by air, land or sea and the shelter boasts high durability thanks to a steel chassis. It can be customised for further protection against more severe threats such as mortar attacks.

Katmerciler showcases its KHAN armoured personnel carrier (APC). The platform can be managed at close range with a handheld remote control. The large bag-type control device allows the vehicle to be sent as a vanguard to areas far beyond human reach, which in turn keeps troops and personnel out of harm’s way.

Turkish military officials said the joint drill wants to develop capabilities of joint headquarters and military units with other countries through shared tasks and maintain preparedness for combat. 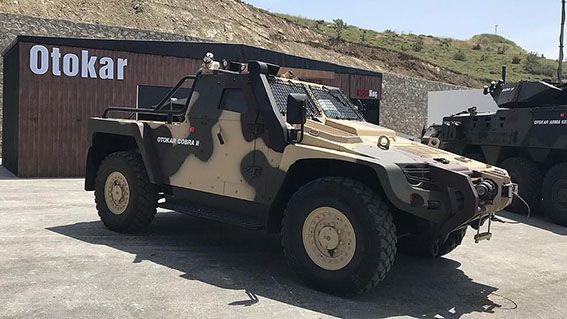