FNH UK, the UK-based subsidiary of  FN Herstal, unveils its full capabilities at DVD 2018, taking place at Millbrook, UK, on 19 and 20 September 2018.

Since its acquisition by FN Herstal on 1 July 2014, FNH UK (at the time known as Manroy Engineering) has undergone a huge level of transformation in the areas of manufacturing and capacity, along with an increased level of sustainability and capability, in order to support the UK defence and security markets.

Backed by FN Herstal’s 130 years of experience in designing, developing and manufacturing innovative solutions based on small calibre firearms and ammunition, FNH UK is now able to offer the group’s entire range of defence and security products to the UK market.

The whole range of FN machine guns (MG) include the FN MINIMI light MG (currently the Mk3 version for improved ergonomics and accessory integration), available in 5.56mm and 7.62mm NATO calibres, the FN MAG 7.62mm NATO General Purpose/medium MG, and the FN M3 and M2HB-QCB .50cal MG, which have repeatedly proven themselves in combat.

The design of the FN SCAR not only gives great performance under very demanding conditions (extreme temperature, sand, mud, water, rough handling), but also great modularity and flexibility. These ARs, in 5.56mm and 7.62mm NATO calibres, with rapidly interchangeable standard or short barrels and able to take the FN40GL grenade launcher, are being employed by Special Forces and regular forces on battlefield missions. They accept the FN FCU Mk3 Fire Control Unit for 40mm grenades and is FN SmartCore Ready for optimised small arms management.

On display for the first time on a UK-based exhibition since being unveiled last November, the FN SCAR-SC Subcompact Carbine fires rifle calibre ammunition from a submachine gun sized weapon. It is a great choice for carrying and use in confined spaces, coming with a wide choice of buttstock types best suited to the user’s morphology and the mission at hand, and is available with semi-auto or selective fire trigger mechanism.

Alongside small arms and weapon systems, the company also proposes a full range of ammunition for any weapon of the FN portfolio, from 5.7x28mm to 12.7x99mm (.50cal) calibre. Various natures, such as ball, tracer and armour-piercing are available. 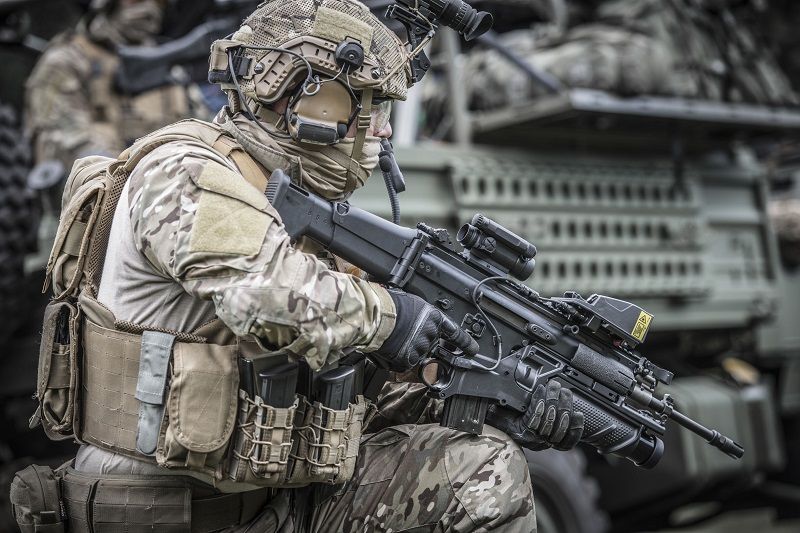