Globalstar Europe Satellite Services has announced that 120 of its SPOT Gen4 GPS messenger devices have been deployed by the Dutch MoD for use in paratrooper training exercises.

The small, handheld unit was selected by the Dutch training teams after recommendations from Belgian colleagues who had already been using them, and following less-than-impressive results from other commercially available alternatives.

“In the places where we do our skydiving training, in remote mountainous and desert locations worldwide, conventional telecoms networks cannot be relied on,” Neils, an instructor at the Dutch Defense Paratrooper School, explained. “The system needs to be practical and very simple to operate. SPOT’s reliability, together with its easy operation, are the standout features for us; we know we can trust SPOT to function at any time, anywhere.”

The Dutch train their paratroopers in a range of challenging locations with extremes of climate and temperature – from deserts in California to the Swiss Alps. Often, terrestrial communications are unreliable or unavailable. Trackers are essential to be able to quickly locate trainees in these often remote and harsh environments. The School had previously trialled a 3G GPS solution but found it unreliable and unable to provide sufficient coverage.

SPOT Gen4 features a one-touch SOS button which will immediately send the user’s GPS co-ordinates to an organisation’s operations team. The devices also allow users to check in with colleagues via the OK button, and the Help button can be used for other non-emergency communications. It is the latest iteration of the SPOT device family, which Globalstar says have been credited with more than 8,000 rescues worldwide. 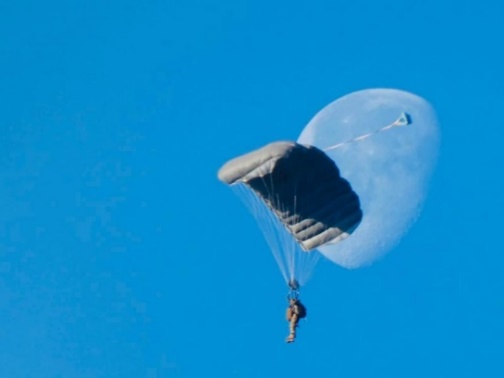 Contrary to popular belief, the ‘challenging locations’ used by the Dutch paratrooper training regime do not include the object in the background! (Globalstar)