Leonardo’s participation in Dubai 2021, which opened this morning, centres on the future of flight and advanced electronics. It will present its revolutionary tiltrotor AW609 for the first time in the Middle East, and will also focus visitor attention on its advanced military pilot training capabilities. “Our partners in the UAE and in the whole Middle East continue to be of great importance to Leonardo, and we believe that the Dubai Airshow will give us the chance to further strengthen these ties and pursue a range of business opportunities,” explained Chief Commercial Officer, Pasquale Di Bartolomeo.

That close relationship between Leonardo and its regional partners is behind the company’s decision to showcase the AW609 in Dubai – its first appearance outside Europe and the US. An impressive feat of engineering, the flexible, multi-mission-capable AW609 can achieve speeds of 500km/h and a range of 2,000km with auxiliary fuel tanks.

The company will also highlight its aircraft protection technology in the form of BriteCloud and the MIYSIS DIRCM, as well as advanced electronics for airborne surveillance, represented by the OSPREY AESA radar and SAGE ESM system. The BriteCloud countermeasure provides latest-generation protection from radar-guided missiles, ensuring detonation far from the intended target. MIYSIS uses a high-powered laser to ‘dazzle’ incoming missiles, forcing them away from the target. Decades of experience in laser and precision targeting enables this to happen at lightning-fast speed, allowing MIYSIS to defend against multiple, simultaneous incoming missiles.

Ensuring that aircraft crews enjoy the highest level of situational awareness, the OSPREY radar offers multi-domain AESA capabilities, supporting a wide variety of missions and providing maximum field of view for a variety of fixed- or rotary-wing or unmanned platforms. For customers seeking an ELINT capability, Leonardo’s SAGE system delivers a unique level of situational awareness to operators. Installed on the MQ-9B SeaGuardian UAS, it is being offered to customers as a fully-integrated capability on-board that system.

Leonardo’s involvement in the UAE dates back to the mid-1970s, with the supply of SF-260 basic trainers and OTO 76/62 naval guns. Since then, it has provided integrated naval systems for combat management, defence systems, naval radars, fire control systems, missile electronics and military radios for more than 40 ships in the UAE, including GHANNATHA-, BAYNUNAH-, FALAJ 2-, and ABU DHABI-class corvettes. Leveraging this track record, last February Leonardo offered itself to Tawazun as a potential partner for design and development of the UAE national Combat Management System, which will underpin the UAE Navy’s future naval assets, and ensure future upgrades for the existing fleet.

High-tech Leonardo platforms in the UAE include over 100 helicopters, secure communications applications, space technologies and training aircraft, including the Aermacchi MB-339 jet trainer, chosen for the Emirati national aerobatic team Al Fursan, whose pilots trained in Italy using the company’s aircraft and teaching systems. Leonardo’s M-345 and M-346 aircraft can cover the entire pilot training syllabus and the new Fighter Attack version of the latter, already delivered to its first international customer, retains all the characteristics of the advanced trainer version while also being a light fighter aircraft capable of carrying out a wide range of operational missions at far lower costs than other front-line fighters. As advanced pilot training continues to be in demand in the region, Leonardo is ready to host students at the International Flight Training School (IFTS), a strategic collaboration between the company and the Italian Air Force. The new IFTS campus now under construction in Sardinia will be an advanced flight academy, able to host students and technical staff, with an infrastructure that will underpin the operations of a fleet of 22 M-346 aircraft and a comprehensive ground-based training system, with classrooms and a modern training system based on latest-generation simulation equipment. 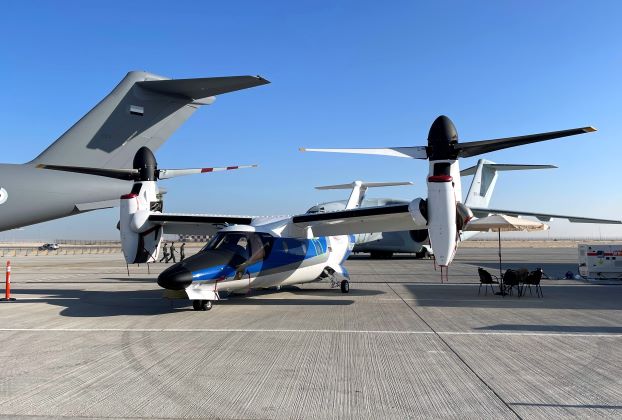 The AW609 tiltrotor on display in Dubai. (Photo: Leonardo)