The start of construction of the 3,600t submarine, as part of a KRW985.7 billion ($826 million) contract last September, comes after the company began building the first in August: the same month that Dosan Ahn Chang-ho, the first of the RoKN’s three Batch I KSS-IIIs entered service.

South Korea, currently also working on the second and third Batch I boats, is expected to build a total of nine KSS-IIIs – three per batch. The first Batch II is set for delivery in 2026, and the second in 2028.

At 89m in length, Batch-IIs are larger than the 83.5m, 3,358t Batch-Is, noted South Korea’s Defense Acquisition Program Administration (DAPA) in a 31 December statement, while pointing out that they will have the same overall beam (9.6m), top speed (20kts), and crew complement (50), as those from the first batch.

Equipped with an air-independent propulsion system as well as local- developed lithium-ion batteries, each Batch II is expected to be capable of deploying more submarine-launched ballistic missiles (SLBMs) than their predecessors. The boats will also feature more advanced sonar and combat systems than those in previous South Korean submarines, noted DAPA, adding that about 80% of components in the new submarines will be sourced locally.

Meanwhile, the agency separately announced that it awarded South Korean company STX Engine a KRW9.4 billion contract to conduct R&D on a new radar system set to be acquired under the Coastal Surveillance Radar-II project.

The agency noted that the new system, development of which is slated for completion by 2024, will feature detection range and target identification capabilities 1.5 times greater than those seen in current radars. Moreover, the new radar should be capable of tracking more than twice as many potential targets and of operating in multiple frequencies and channels. Mass production of the new systems is expected to begin in 2025, after which replacement of the ageing coastal surveillance radar units will begin “in phases”. 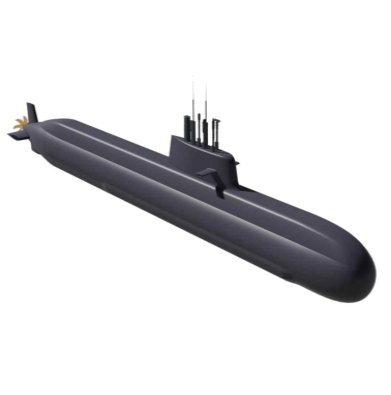 A computer-generated image of the KSS-III Batch-II SSK. (Image: DAPA)