Train When You Want, Where You Want

If there is one area where operational need and technical capability appear to be converging, it is in synthetic training systems. It is expensive and dangerous to give trainee pilots early experience in a cockpit, but nobody can learn to fly without spending a lot of time doing so. Perhaps even more challenging, JTACs and FACs [Joint Terminal Attack Controllers and Forward Air Controllers, whose job is to call in air strikes on nearby ground targets], have a complicated and lengthy training regime to follow before being fully qualified. In both cases, militaries have long sought the ability to rely more on synthetic training, but, until relatively recently, the fidelity of available systems limited their efficacy and utility.

Add portability to the mix, and it appears that Inzpire may have a hit on its hands. The Lincoln-based training services and systems provider has launched two new products at DSEI under the CASE banner [Compact Agile Simulator Equipment], which comes in UAS/ISR and JTAC varieties. The former simulates the cockpits and data-exploitation capabilities of a range of unmanned and manned surveillance platforms, while the latter places trainee JTAC/FACs inside a vividly drawn 3D battlespace via a wearable headset, allowing them to view distant virtual objects while still being able to see handheld equipment.

“Often, with a VR headset, you can’t see much of your hands, or use them – it just allows you to immerse into an environment,” says Simon Gilbert, a 22-year Royal Air Force veteran and now the firm’s Director of Business Development. “As a JTAC, you can train there with a virtual-reality headset on, and you can see everything around you [in the simulated environment] – the troops behind you, the tanks, the aeroplanes – but you can you can still see the buttons you’re pressing. You can actually look at the target and write something on a notepad.”

Wearing the headset underlines Gilbert’s point. Nobody would mistake the computer-generated virtual environment for the real world, but the simulated scenario is vivid and there is a noticeably enhanced sense of scale and distance, compared with standing in the projection domes that give a similar 360° capability to high-end cockpit simulators. Additionally, such a system requires not just a very large building in which to site it, but dozens of expensive projectors to make the illusion work. CASE JTAC fits in a couple of plastic cases and can be taken to wherever it is needed – and still retains the capability to network with multiple other simulators for distributed live training.

Inzpire has grown significantly in recent years – Gilbert became the 140th employee when he joined in 2017, and the current head count is over 250. He is an example of the company’s policy of recruiting extensively among former armed services personnel. Systems such as CASE JTAC are the result of this hiring philosophy, with recent end-user expertise ensuring products reflect current operational realities and real-world needs. This is particularly helpful as armed forces grapple with questions around how much of their training can be carried out synthetically.

“Every customer is different,” Gilbert says. “Some are very much that it has to be live flying; some are leaning all the way towards an almost fully synthetic solution. What we have to do is make this as realistic as possible – so we’ve got people in the company who’ve lived, breathed and done this.” 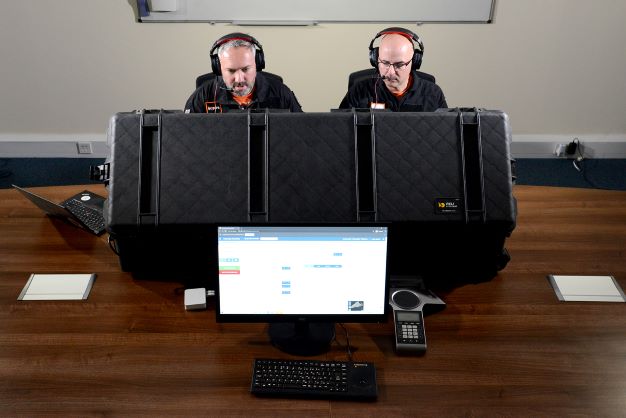