OSINT, AI, Machine Learning – All Grist to the Mill

Defence intelligence is at a decisive point in its evolution, as unprecedented opportunities afforded by technology open up – but analysts also face growing challenges too. In his keynote address at DSEI 2021,  Britain’s Chief of Defence Intelligence, Lt Gen Sir Jim Hockenhull, outlined the potential his discipline can harness, but was frank in discussing the difficulties.

“Defence intelligence faces an immediate challenge and also a rapidly developing new opportunity […] The challenge is created by threats from hostile state adversaries, and the opportunity comes from the huge potential of new technologies. Both are accelerating,” he told delegates.

Noting that much of the focus in recent years has been on threats from terrorists and non-state actors, and acknowledging that these have not disappeared, Hockenhull nevertheless highlighted nations as likely to provide the most pressing challenges going forward. This, of course, is not unprecedented, but aspects of the current situation are.

“What is new is that this is happening in parallel with profound changes in society, driven by new technologies coming together in unforeseen ways […] The combined effects of exponentially increasing volumes of data of all sorts, cloud computing providing unprecedented computing power on demand, data science, machine learning and the commercialisation of space are genuinely transformative. Looking even further ahead, it’s a safe bet that maturing artificial intelligence, quantum computing, and virtual reality technologies will disrupt this future normal equally profoundly.”

The task for the military intelligence professional, then, is both complicated by the proliferation of these new technologies, and potentially enhanced by them. So far, however, Hockenhull indicated, adapting to this has not gone so well.

“If we compare [defence’s progress] with disruption in the private sector, we should recognise perhaps that we talk a good game on artificial intelligence and cloud, but, with some limited exceptions, we’ve got nowhere near exploiting the potential that they offer […] We need to think more imaginatively about how these technologies can help us out-compete our adversaries. That means not just doing things differently, but doing different things. It may also mean questioning some of our fundamental assumptions about how defence operates.”

He said there are three main ways defence intelligence can improve. It has to operate more broadly, “both in terms of geography, and across all five domains: land, sea, air, space and cyber”. Analysts have to embrace increased complexity. And the pace at which work takes place has to increase to match adversaries’ capabilities.

Private-sector suppliers will be key in addressing another area in need of improvement – the integration of open-source information into intelligence systems and products. Hockenhull argued that, while the military’s use and understanding of the potential of open-source data has come a long way, there is still an institutional bias towards classified sources which needs to be overcome.

“Over a long period of time, there’s been an over-reliance, either by intelligence organisations or, at times, by decision-makers on pieces of significant, highly classified information,” he explained. “What I want to do is to transform our organisation so we’re still exploiting that, but we recognise that that is perhaps about a fifth of the information that I need to be able to access. And I need to be able to use all of that other information in a much more flexible, engaged way in order to be able to ensure that the widest range of information, the widest range of views and opinions are brought together so we continue to challenge ourselves.”

Words to live by. [Editor] 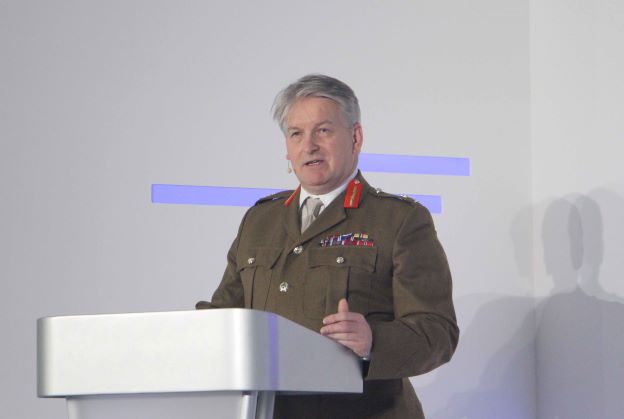