DSEI 2021: Travelling At The Speed Of Thought

Conversations at DSEI can often take slightly unexpected turns. As he pulls a small tan-coloured box out of his jacket pocket, Tony White – CTO for Ultra’s Precision Control Systems division – looks intent on updating his social-media status – or perhaps sending a text message. Instead, he has opened a portal to a different world: one in which soldiers control drones with their minds.

“This thing here is a product we’ve been working on for, probably, about six years, called UltraLYNX,” he says. “It’s a wearable computer and power and data hub. It’s designed to go with the soldier at the front, and interfaces all of his wearable devices – his radio, battery, GPS. We have a processor in here which makes it smart. This was my baby, and we’ve got it in production, we’re selling, and we’ve got progammes we’re targeting. And as CTO, I’ve been looking at UltraLYNX exploitations: what can I do next?”

Casting the net far and wide, White found himself looking at ideas percolating everywhere, from the floor of the Consumer Electronics Show in Las Vegas to the product-development teams at Mercedes Benz. He began to wonder: is there a way that the smart processing power of the hub could be used without the soldier having to command the device using a keyboard or screen? Indeed, might it be possible to do without any kind of physical input at all?

“Brain-computer interfacing has been around for a while in that kind of world,” he says, referring to CES. “They’re looking at how they might be able to measure brainwaves for gaming. So we’ve taken some COTS gaming technology and, effectively, plugged it into UltraLYNX. And anything that’s connected to UltraLYNX, we can now control using thought.”

Of course, there is a bit more to it than that.

White explains that the sensors can detect 16 different thought patterns. “Really, it’s 15, plus neutral,” each of which a user has to be trained to produce. This can be done by manipulating an animated three-dimensional cube in different ways: one thought process may be to push the cube away, another to pull it forward, another to spin it to the right around a horizontal axis, and so on. Tasks specific to a particular device or subsystem can then be assigned to one of those 16 patterns, much like programming the function key of a computer to perform a subroutine.

Using this methodology, a soldier might, say, imagine rolling a cube forward, and by so doing, generate brainwaves that the sensor recognises, and which the hub is programmed to interpret as “change the channel of the radio from one specified frequency to another.”

The same sensors offer wellbeing functionality – monitoring for indicators of stress, for instance. The system can also recognise the thought processes that lie behind facial gestures, which can be mapped onto device functions, too. This means it becomes possible for a user to, for example, activate their camera by blinking.

Ultra has built a concept demonstrator, which it took to the Bournemouth Air Festival earlier this month, where “we had 150 kids on a STEM exercise flying a drone by thought,” White says. Novice thought-flyers were welcome: he reckons it takes no more than 20 minutes to learn enough mind-control techniques to be able to steer a drone in flight. But the system is not on view at DSEI, and is still some way off being a productionised capability. Ultra is not yet touting for business among its military customers, though the company is certainly listening to ideas about how such systems might work in the field.

“We’re talking to people about where it might be used,” White says. “We’ve got interest in a variety of places, from special forces to data-analyst guys who want to know how their people are doing. We’re flying a drone, but we’re doing that because it’s a cool thing to do – I don’t think you’d fly a drone by thought for real. All I can say is, I’m very privileged to be in an organisation where I’ve been given the opportunity to spend some money, to go and investigate the state of the art, to look at how we can apply it in our world, and to put together a demonstration which has allowed us to begin to explore the possible.” 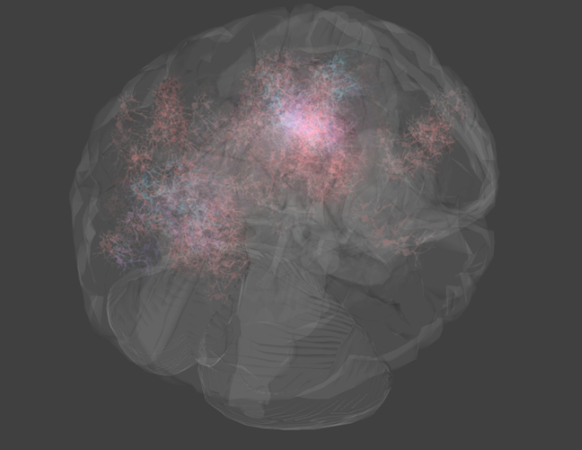 A Chief Technology Officer’s brain. Should we be very afraid – or simply afraid? (Image courtesy of Ultra Group)