In addition to its military bridging systems, KMW subsidiary WFEL will take the opportunity of DSEI 2021 next month to show the BOXER bridge-layer for the first time at a defence exhibition, the company announced on 24 August.

As seen during disaster relief operations in Europe’s severe flooding in July, WFEL’s rapidly-deployable military bridging systems are increasingly called upon for deployment to provide emergency temporary infrastructure during natural disasters. The new BOXER bridge module can deploy two types of bridge: a heavy variant ,which spans 14m and can carry 80t; and a longer, 22m version, certified for 50 tons.

WFEL’s Dry Support Bridge (DSB) and Medium Girder Bridge (MGB) are already in service with a number of armed forces around the world. At 120 MLC [Military Load Classification], the DSB can get traffic and supplies moving over a 46m gap in less than 90mins, using just eight soldiers and a single launch vehicle: crucial in rapidly escalating combat, homeland defence or disaster relief scenarios – when every second counts. 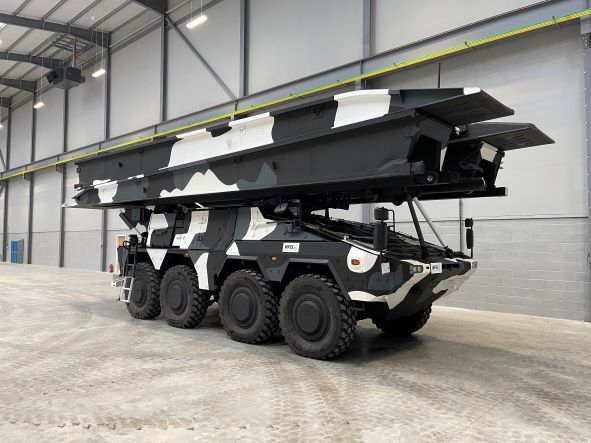 MON wonders how much speculation there will be at DSEI as to what the selection of camouflage scheme for the new BOXER bridge-layer may mean – if anything. (Photo: WFEL)
