Testing on a Range of Aircraft and UAS

BriteCloud, an innovative, expendable EW decoy developed and built by Leonardo UK, is nearing the end of a process to integrate it onto the US Air National Guard’s (ANG) F-16s, and has completed separation tests ahead of a qualification programme on the General Atomics (GA) MQ-9 family of UAS. Meanwhile, the system – already fielded on TORNADO – is being integrated onto TYPHOON, and has also been deployed from an undisclosed Airbus UAS.

“In autumn last year we did some work with GA on MQ-9A and MQ-9B,” says Rob Laidlar, Leonardo’s Head of ECM sales. “It’s increasingly going to be used by people in contested airspace, so GA are doing work to generate what they call the SPP – self-protect pod. There is a variety of equipment within that – things like an RWR [radar warning receiver], and a countermeasure dispensing system. We launched a number of inert BriteCloud units, just to prove it separated safely from the aircraft and was therefore fit for further trials to use the live units […] The other trial we did at the end of last year was with an Airbus unmanned aerial vehicle […] There was a threat emitter [on the ground], and it was a live, all-out trial using BriteCloud to decoy threat systems from the Airbus UAV. That was hugely successful, and we are now discussing next steps with Airbus.”

BriteCloud represents the latest evolution in counter-missile technology, which began with chaff decades ago and moved into towed decoys more recently. A dispensable, miniature system, BriteCloud offers the potential of greater miss distances because it will be much further away from the platform than a tethered decoy, while its small size means it can be easily integrated into dispensers already fitted on most combat aircraft at minimal expense. Laidlar sees it not as a replacement for the other anti-missile technologies, but as a complementary capability that can be used alongside them to provide layers of protection.

The small size, light weight and relatively low cost mean that this kind of protection is now affordable for unmanned systems, but it is crewed aircraft where BriteCloud is likely to find most favour. The system is going through the US Foreign Comparative Test (FCT) process ahead of integration on ANG F-16s, but, Laidlar says, the bigger picture there is what acceptance via that route would mean.

“When BriteCloud is successful – which we know it will be – at the end of that we can go straight onto a programme of record, and BriteCloud is therefore able to be purchased by US DoD entities to bring onto their platforms […] However, the FCT comes with a caveat that while FCT is ongoing, other US DoD entities are limited in what they can do with BriteCloud. Hence, our work on MQ-9 has stopped for a little while, pending the FCT completion – then we’ll be able to restart that work again.” 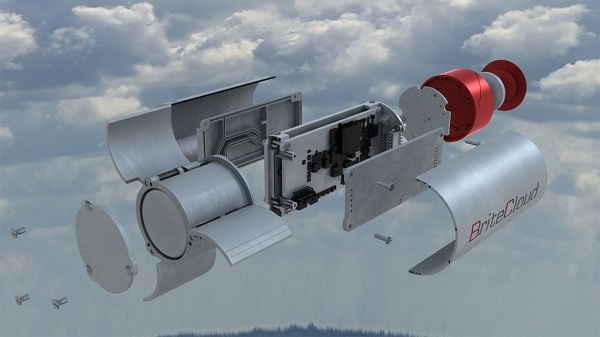 The BriteCloud 218 showing its structure. (Image from MON archives)