Streamlight Focus on Military and Police Use

During DSA 2018, held 16-19 April in Kuala Lumpur, Malaysia, Streamlight, Inc displayed its wide range of its illumination tools, with particular focus on products geared towards military and police use.

Streamlight’s ProTac series of tactical lights and flashlights all offer options of light settings and multiple battery source use and with the latest designs having a USB port to directly recharge batteries or using Streamlight’s 18650 USB lithium-ion battery which features a micro USB port which enables the battery to be charged within five hours. Tony Iannozi, Director of International Sales, told MONCh that the prevalence of devices and ports that charged electronic gadgets via USB allowed users of Streamlight’s ProTac series to have more options for power sources for their lights.

Mr. Iannozi also highlighted the TLR-8 rail mounted light which includes an integrated aiming laser. The light provided is 500 lumens and the TLR-8 will run for 1.5 hours continuously when in dual mode with the laser. The design has a front loading battery feature which allows batteries to be replaced without having to disengage the device from the rail and features a windage adjustor and a safety switch to prevent accidental activation. For subcompact handguns without rails, Streamlight has the TLR-6 which is designed to securely attach to the trigger guard of a handgun and features a 100 lumen light and red aiming laser with a battery run time of 1 hour when used in dual light/laser mode.

Featured at the booth was also Streamlight’s SIDEWINDER military lights, the SIDEWINDER Compact II can be clipped to a MOLLE vest, belt , hat brim or pocket or helmet mounted with three battery options, “AA” Lithium, “AA” Alkaline and CR123A Lithium and two models are available, each featuring 4 LED light options,  the military model with white, blue, IR/IFF and Red and the aviation model with white, blue, IR/IFF and green. The SIDEWINDER Rescue has 4 LED light options,  white, blue, IR and green and features a flashing beacon with when used with the diffuser feature, provides an omni directional light for signaling for help. The diffuser also allows the user to go from a tight focus beam to a wide, soft beam. The SIDEWINDER Rescue can be powered by two “AA” alkaline batteries or two “AA” Lithium batteries.

Shown also were Streamline’s SIEGE Lantern, which is able to be clipped or hung anywhere, upright or inverted via it’s handle and D-rings and has an endurance of thirty hours on high settings or 12 hours on low.  Powered by 3 “D” sized alkaline batteries, it features three white light settings, a red light and an SOS mode. The lantern is also floatable allowing it to be retrieve from water. The smaller Siege AA Lantern runs on 3 “AA” alkaline batteries. Light options is one white LED and two red LED. 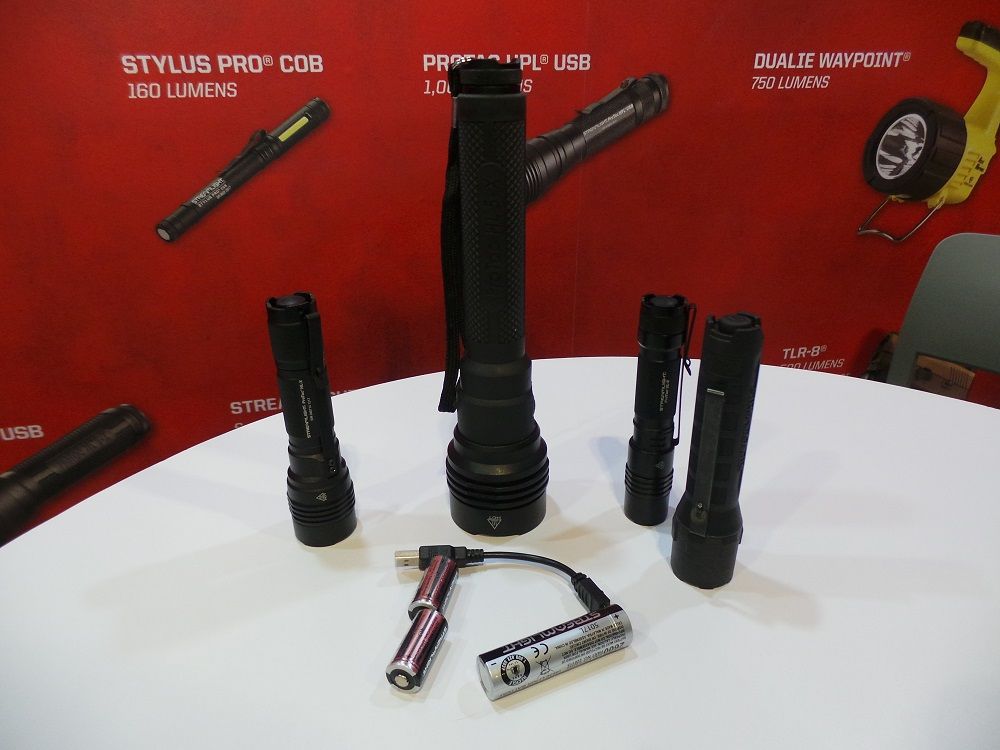