The system, which incorporates radar and RF technologies to detect, identify, and defeat UAVs, is a further development of the AUDS counter-UAV solution currently in service with US and coalition forces, and has been operationally deployed in the Middle East.

One of the key components of the BlackTalon is the ‘Claw’ set of antennas, designed to defeat UAVs up to Class/Tier 3, which would include the ‘Shehab’ loitering munition used by Hamas. The ‘Claw’, which can be tailored to customer requirements, features a series of inhibitors/jammers designed to disrupt the control, navigation, and telemetry links used by the UAV out to a range of at least 6 kilometres.

The BlackTalon, which is the result of a collaboration between ECS and TCI, can detect UAVs out to 30km, can be deployed from both fixed sites and mobile platforms and be used by a wide range of security services to defend air bases, forward operational bases, and critical national infrastructure, for instance. “Our aim is to identify potential customers across Southeast Asia to enhance national security from the ever-grown threat posed by UAVs, regardless of whether these platforms are deployed by insurgent groups or hostile state actors,” said a company official.

ECS also told MON that it has developed a datalink capable of delivering real-time, full-motion video from an airborne platform to a variety of ground stations – regardless of whether these are fixed, mobile, or hand-held – out to a range of 200 kilometres. These ground stations can be IP-linked to provide situational awareness to C2 entities anywhere in the world. Called ‘Evenlode,’ the datalink can be deployed in a variety of aircraft types, including helicopters and UAVs. That said, the company has also developed an even smaller datalink solution, called ‘Tove,’ that has been specifically designed for use by UAVs.

Gabriel Dominguez at DSA for MON 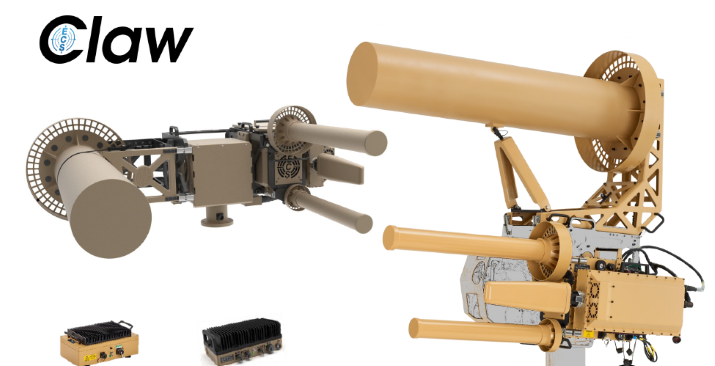 The Claw demonstrating the aspect from which its name derives. (ECS)