Training Fixed-Wing Pilots for US Army

As a leading training systems integrator, CAE has steadily diversified its business and gained traction as a world class provider of live flying training for military pilots. CAE already provides live flying training for the the Royal Canadian Air Force (RCAF) through its provision of the NATO Flying Training in Canada (NFTC) programme. Acquired from Bombardier in 2016, the company trains future RCAF fighter pilots at NFTC by way of academics and live flying training with the CT-156 HARVARD II turboprop trainer and the CT-155 HAWK advanced jet trainer.

“As a training systems integrator for air forces globally, this addition to CAE gives us another important capability and opportunity for growth,” said Marc Parent, CAE’s President and Chief Executive Officer. “We are also proud to now operate one of the world’s premier military pilot training programmes and deliver the total training required, including support for live aircraft training… We plan to expand the NFTC programme, and leverage our new capabilities into future integrated training systems programmes worldwide.”

True to Parent’s words, CAE’s American business unit – CAE USA Defense & Security – announced on 4 June 2015 that it was successful in its competitive bid to deliver training for the US Army’s Fixed-Wing Flight Training Program. Under terms of the contract, which was awarded as a firm-fixed-price contract for U$29 million for the base period and six one-year options through 30 September 2023. If all options are exercised, the total value of the contract is expected to be approximately $200 million.

“We are honoured and proud that the US Army has selected CAE as its training systems integration partner of choice for fixed-wing training,” said Gene Colabatistto, Group President, Defense & Security, CAE. “We will be bringing together live, virtual and constructive training by providing the US Army with a modern and flexible training programme that will help ensure safe, high-quality training for Army fixed-wing aviators. This is another great example of CAE leveraging its training systems integration expertise to provide a comprehensive, turnkey training solution.”

The programme is delivered from a newly constructed company-owned and operated 79,000 square-foot training facility located adjacent to the Dothan Regional Airport in Dothan, Alabama. The Dothan facility is perfectly situated in close proximity to the US Army’s primary flight training base for aviation at Ft. Rucker in Alabama – it’s from here where pilots are selected for fixed-wing training.

The CAE Dothan Training Center officially opened in March 2017. The centre is designed to provide comprehensive fixed-wing flight training to the US Army, US Air Force (USAF) and other customers. These fixed-wing aircraft pilots go on to provide transport for important personnel, and to fly special intelligence missions.

CAE and its team of industry partners use CAE’s Dothan Training Center to deliver academic and simulator training, and they utilise the adjacent Dothan Regional Airport to deliver live flying training by way of CAE-owned Grob G120TP and US Army-owned Beechcraft C-12 HURON aircraft.

The primary customer at CAE’s Dothan Training Center is the US Army. Under the Army’s Fixed-Wing Flight Training programme CAE is responsible for providing all the training required for experienced US Army rotary-wing aviators transitioning to fly the Army’s fleet of more than 350 fixed-wing aircraft.

CAE is also supporting the Army’s implementation of a new initial-entry fixed-wing (IEFW) training programme so that entry-level Army students can begin their career track to fixed-wing aircraft much sooner. For the IEFW course, students undertake approximately 135 hours of academic training, and 35 hours of simulator training. This is followed by approximately 70 flight hours in aircraft – with 25 hours in the Grob, and 45 hours in the C-12.

The Army Fixed-Wing Flight Training programme also serves as the formal training unit for recurrent training for the Army and USAF C-12 Huron and other variants of the King Air aircraft such as the RC-12 Guardrail, an airborne signals intelligence platform.

In total, more than 600 US Army and USAF pilots will be trained annually in Dothan.

CAE’s Dothan Training Center houses state-of-the-art classrooms as well as an impressive suite of synthetic training equipment. The centre’s classrooms are configured with large interactive displays and networked computer stations which allow instructors to deliver training at a pace which allows students to advance quickly, or to focus on areas that need reinforcement.

Once the academic phase of training is complete, students then transition to CAE-built Full Flight Simulators. The simulators at the Dothan Training Center are qualified to Level D by the Federal Aviation Administration – the highest qualification for flight simulators. The Dothan Training Center houses four CAE 7000XR Series C-12 HURON full-flight simulators, two of which are equipped with CAE’s revolutionary roll-on-roll-off (RORO) cockpit design which allows cockpits of different configurations to be used in the simulator. When two of the cockpits are installed on the full-flight simulator mothership, the other two cockpits can be connected to a docking station to be used as Level 6 equivalent flight training devices. These RORO simulators are also adaptable to future fixed-wing utility aircraft, which adds flexibility and the potential of greater capacity to the services delivered at the Dothan Training Center.

Todd Conyers, Program Manager for CAE’s Dothan Training Center spoke with MONS for this feature: “The beauty of CAE’s roll-on/roll-off simulator technology is it allows us to switch out Army or USAF configured C-12 cockpits. That allows us to adapt the Level D simulator according to the courses we’re teaching. We can change them out and have them operational in about two hours.”

Taking to the Air over Dothan

The Army’s Fixed-Wing Flight Training programme features live flying training provided by CAE and its team of subcontractors. Approximately 400 nautical miles around the Dothan Regional Airport are available for student pilots to develop their skills.

Students first train on CAE-owned Grob G120TP aircraft to gain proficiency from initial through basic flight training, and in Upset Prevention Recovery Training which is jointly provided by CAE and Aviation Performance Solutions which is headquartered in Phoenix, Arizona.

The company’s Grob G120TP aircraft are fitted with an impressive flight data video recording system which captures every moment of a student pilots actions. These videos are downloaded after each flight and are used to conduct instructional review in one of the centre’s 28 specially configured brief/debrief rooms.

Students then transition to a fleet of ten US Army-owned C-12U HURON aircraft, which are operated by CAE instructors.

According to Ray Duquette, President and General Manager of CAE USA, the company expects to grow its business in Dothan as it has excess capacity along with reconfigurable full flight simulators: “We are very proud of what we’ve developed at the Dothan Training Center and we can take that model, not just on the aviation side where you see us most, but we can take those same competencies across to the land domain or to the maritime sea domain, so that’s what you’ll see us doing across the board at the defence and security level.” 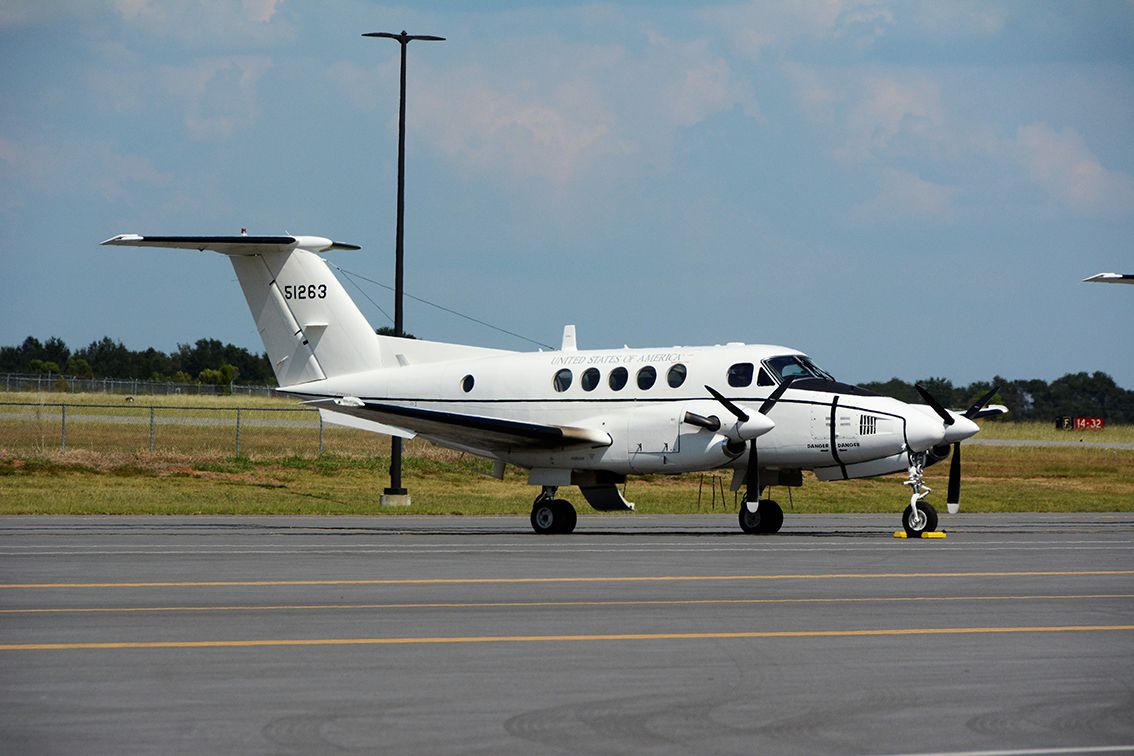