Leveraging Deep Turkish Experience to the Benefit of Other Operators

STM Savunma Teknolojileri Mühendislik ve Ticaret AŞ, a leading player in the Turkish defence industry, will present its naval platforms, tactical mini-UAS and cyber security capabilities at DIMDEX 2022 in Qatar next week. Under the leadership of the Presidency of Defence Industries (SSB), STM continues to export the experience it has accumulated in meeting domestic needs to friendly and allied nations, through cooperation and technology transfer agreements.

The company will highlight its İstif (I)-class frigate, a replenishment tanker produced for Pakistan, the STM-MPAC multi-purpose fast patrol boat and its tactical mini-UAS – Alpagu, Kargu and Togan – as well as its integrated cyber security solutions with participants at the event.

Playing a critical role in fulfilling the requirements of the Turksih Navy, STM is engaged in collaboration, technology transfer and business development activities in over 20 countries, from South America to the Far East. As part of its design, construction and modernisation activities, STM produces flexible indigenous engineering solutions for Turkey’s surface vessels and submarines, and for the navies of friendly and allied nations, addressing specific needs and ensuring more effective mission performance. Such systems are exported as quality, affordable and modern engineering solutions. STM, with its long-term service support and indigenously-developed weapon systems, makes a difference, offering its products and capabilities to foreign navies, even while under embargoes.

STM was the principal subcontractor for the four Turkish MiLGEM Ada-class corvettes, and has designed – and is the main contractor for = the TCG İstanbul, Turkey’s first national frigate, which will be delivered in 2023 with at least 75% indigenous content.

Other projects in which STM has played a leading role include: TCG Ufuk, a test and training vessel, delivered in January; TCG Güngör Durmus, the first vessel built under the Logistic Support Ship project, commissioned last December; UTGM Arif Ekmekçi, the second logistic support vessel, is due to be delivered in 2024; and the Fast Patrol Boat project, for which STM is the principal design contractor.

In the submarine domain, STM was main contractor for the successful modernisation of two Ay-class boats; is lead contractor for modernisation of four Preveze-class submarines; and is playing a crucial role in the New Type Submarine project (Type-214), having recently achieved a major milestone in bringing Turkey into the small ‘club’ of nations capable of manufacturing the complex ‘head sections’ of submarines, including torpedo launch tubes. The company’s STM 500 small submarine is generating widespread interest.

STM attaches great importance to cost-effectiveness, uninterrupted technical support and knowledge transfer in every project, creating collaboration that will enhance the defence capabilities of other nations. The company began such a project for construction of a corvette for the Ukrainian Navy in 2021; built and delivered the PNS Moawin fleet tanker to Pakistan; acts as main contractor for the modernisation of Pakistan’s Khalid-class (Agosta 90B) submarines; and is involved in the construction of four Ada-class corvettes for the same nation.

In cyber security, STM offers integrated services that include cyber threat intelligence, decision support systems, security of applications and determination of security levels.  The STM Cyber Fusion Centre (CFC), the first of its kind in Turkey, has been playing a key role since 2016.  The company established a Cyber Defence Centre for the Turkish armed forces and is also engaged in an information security project for the Cyber Crimes Department of the Turkish National Police. 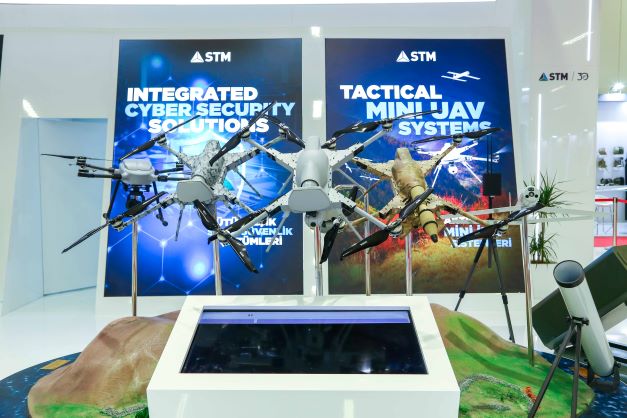 A selection of mini-UAS will form an integral part of the company’s considerable presence at DIMDEX. (STM)