Deliveries of Su-57 to Russian Aerospace Forces by Year-end

Quoting Rostec Corporation, Russian media in the last several days have made great capital of the announcement that the Russian Aerospace Forces are to receive 70+ new Sukhoi Su-57 combat aircraft by 2027.

Several of the fifth-generation fighters are to be delivered by the end of this year, according to the Rostec release. This is in stark contract to recent reports in the Western media, which consistently belittle the aircraft as well as suggest it is unlikely to enter service before 2027 due to the lack of funding and significant delays in production.

Rostec – and other Russian sources – contest the West’s judgement of the Su-57, explaining that America (in particular) views the Su-57 as “an F-35 killer” and therefore seeks consistently to undermine its credibility as an effective fifth-generation combat platform. The company has confirmed deliveries for this year, without specifying numbers. Meanwhile, Defence Minister Sergei Shoygu has stated that the Aerospace Forces will receive 22 aircraft by the end of 2024, and that total deliveries will reach 76 by the end of 2027.

While not seeking to become embroiled in a ‘they said, they said’ dispute over the relative value of the two opposing fifth-generation assets, MON has it on good authority there is at least a measure of concern in Washington regarding the Sukhoi – and that concern is, in part, related to the aircraft’s ability to carry hypersonic missiles, such as the 2,000+km range KINZHAL. 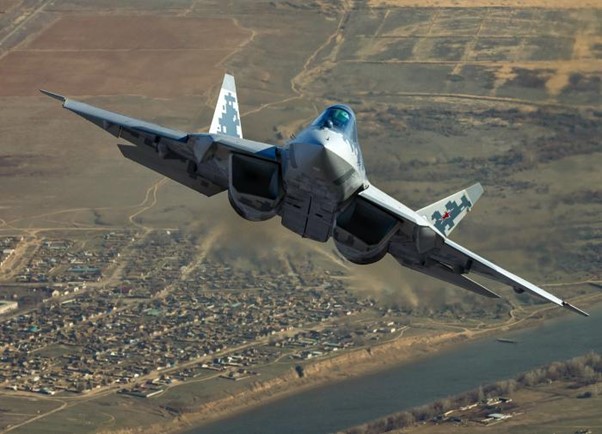 Though it may, indeed, have a number of flaws, the Su-57 is not an aircraft to be easily dismissed or ignored. (Photo via Russian internet)