At DEFEA 2021 in Athens this week, Nexter is unveiling its VBCI PHILOCTETES as a candidate for the Greek Army’s infantry combat system requirement.

Featuring a remotely-operated 40mm cased telescoped turret from CTAi and a medium-range MMP missile launcher from MBDA, the PHILOCTETES, named for a mythical hero of the Trojan War, meets the Greek Army’s requirements for mobility, protection, modularity and firepower, according to the company.

Also featured at the show will be the 105 LG artillery gun. In order to meet the Greek Army’s artillery ammunition requirements, Nexter is exhibiting its range of 105mm and 155mm conventional munitions, its smart BONUS and KATANA solutions, and propellant charges and fuses. In addition, a broad sample of the ammunition portfolio will be showcased – from 20, 25 and 30mm through 40, 76, 100 and 127mm naval calibres.

The 40CT cannon offered on the PHILOCTETES has already been selected by Belgium, France and the UK, and offers truly superior performance compared with 30mm systems, engaging a broad range of targets, from light vehicles to helicopters and UAS. The 30mm cannon is also highlighted – it is already in Greek service on the MIRGAE 2000 and RAFALE combat aircraft.

Finally, Nexter will exhibit the NERVA range of ground robots equipped with various mission modules, as well as the IXOS multi-mission aerial drone, which can be equipped with an optronic ball or an explosive charge to engage an individual target. 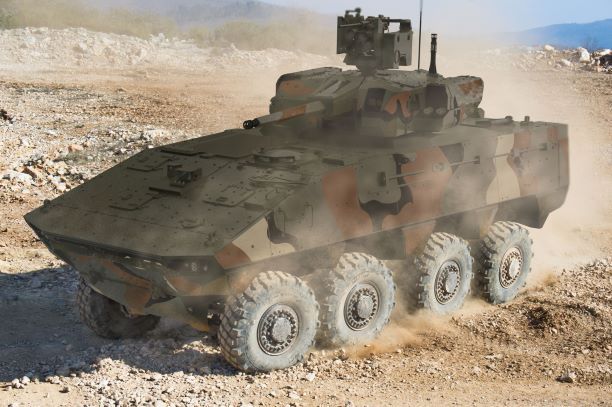