President Donald Trump stated on 10 April that Russia should “get ready” for the possibility of an attack by US Navy Raytheon BGM-109C Tomahawk Land Attack Missile surface-to-surface missiles against suspected Syrian government chemical weapons targets this weekend.

His warning follows an aerial bombardment of the town of Douma in southwest Syria by the Syrian government with ordnance containing chlorine gas which, members of the opposition opposing the Syrian President Bashir al-Assad and emergency workers, have claimed killed over 40 people. Russia has responded to the expected US military action by threatening to shoot down any incoming missiles, according to a warning given by Alexander Zasypkin, Russia’s ambassador to Lebanon, echoing the Russian military top brass.

Russia’s Ground-Based Air Defences (GBAD) remain a cause for concern in the Syrian theatre of operations. Since Russia’s intervention in Syria’s civil war in support of Mr. Assad commenced in September 2015, Moscow has steadily increased its GBAD footprint. Its deployment, to this end, has included a number of advanced systems such as the KBP Pantsir-SI (NATO reporting name SA-22 Greyhound) short range air defence system which is equipped with a mixture of 30mm anti-aircraft artillery and 57E6/E Semi-Active Radar Homing (SARH) Surface-to-Air Missiles (SAMs) with a range of 10.8 nautical miles/nm (20 kilometres/km), and a comprehensive fire control radar transmitting in the ultra high frequency band of 300 megahertz/MHz to three gigahertz. The Pantsir-S1 systems have been reinforce with Almaz-Antey S-400 Triumf (NATO reporting name SA-21 Growler) high-altitude SAM batteries which have an engagement range of up to 216nm (400km) using a myriad of SARH and active radar homing missiles, and an assortment of powerful air surveillance and fire control radars. Two of these SAM batteries are thought to have been deployed to northeast Syria; the first to protect Russia’s deployment at the Humaymin airbase, and the second, believed to have occurred between April and July 2017 which maybe helping to protect a large-scale Syrian army deployment in the Hama Governate in western central Syria.

In addition, Syria itself had a significant Integrated Air Defence System (IADS) although, with the exception of the shoot-down of an Israeli Air Force (IAF) General Dynamics/Lockheed Martin F-16I combat aircraft on 10 February, and a Turkish Air Force F-4E Phantom combat aircraft on 22nd June 2012, it has shown itself largely impotent against IAF combat operations over the country, and air operations by the US-led coalition battling the Islamic State of Iraq and Syria (ISIS). While the Syrian IADS maybe holding its fire given that the US-led coalition is fighting an insurgent group which is also an enemy of Mr. Assad, Israel’s actions, which have focused on attacking Iranian and Iranian proxy military targets active in the Syrian theatre of operations in support of Mr. Assad, have very much been perceived as a threat by the regime. It is entirely possible that seven years of bitter civil war has taken its toll on the Syrian IADS and thus greatly reduced its effectiveness.
Furthermore, the SAM and ground-based air surveillance and fire control radars which comprise the system have been encountered on numerous occasions during previous operations by the US and her allies in Iraq, Libya and the Balkans. Since the commencement of Operation INHERENT RESOLVE on 15 June, the United States Air Force (USAF), and its allies, have deployed significant Electronic Intelligence (ELINT) gathering assets into the Syrian and Iraqi theatres such as USAF and Royal Air Force Boeing RC-135V/W Rivet Joint ELINT gathering aircraft, not to mention the strong possibility that the US and allied air forces, and the IAF, may well have exchanged information regarding the electronic and kinetic weak points of the Syrian IADS should any future Offensive Counter Air (OCA) effect, no doubt incorporating a robust air defence suppression element, be required. For all intents and purposes, to quote the former US Secretary of Defence Donald Rumsfeld, the Syrian IADS is a “known known,” while the S-400 in particular, is a ‘”known unknown”, given that it has yet to be encountered by the US and her allies in combat.

The S-400 had already been deployed when the US performed BGM-109C strikes on 7 April 2017 against the Shayrat airbase in western-central Syria in retaliation for the Syrian regime’s chemical weapons attack on the town of Khan Shaykhun in northeast Syria which used Sarin nerve agent and which may have killed over 100 and injured upwards of 550. Prior to the attack, Russia had been warned by Washington DC that the missile strikes would take place, giving it time to remove any personnel potentially at risk and this may have been the reason why the S-400 or any Pantsir-S1 units were not deployed against the attack.

That said, the increase in temperature of the rhetoric of both Mr. Trump and Mr. Putin’s administrations over the past few days may mean that Russia could decide to meet any future BGM-109C attack with force. Yet such an action on Russia’s part could have consequences: Firstly, any use of the S-400 in this role would have the risk of exposing the system’s radars and allow the collection of valuable signals intelligence by the US, her allies and/or the IAF to this end. Such intelligence is invaluable for the development of jamming procedures, evasive manoeuvres and the calibration of anti-radiation missiles designed to neutralise such threats. Secondly, any successful interception of the missile strike could prompt the US into performing a wider air campaign which could include a substantial OCA effort to sanitise as much as possible the airspace above Syria. Such a campaign could see assets such as the two S-400 batteries coming under attack as part of an air defence suppression effort, alongside the attack of other Russian ground-based air defences such as Pantsir-SI units; although these can be challenging to hit on account of their mobility. This course of action would risk bringing the US and her allies, and the Russian deployment in Syria into direct kinetic contact with one another, which at the very least, would be a serious development.

Mr. Putin is far from stupid, and he may decide that anything more than a half-hearted attempt to shoot down any US missiles may not be worth the potential propaganda coup of destroyed BGM-109D carcasses being paraded on the world’s television screens and social media, given the risk of potential escalation. Nevertheless, Russia’s bluster in recent days in the aftermath of the Douma attack gives Mr. Putin little room for manoeuvre with the risk of any reluctance to engage any US attack being interpreted as weakness by his supporters and opponents in Russia, Mr. Assad’s regime and the international community writ large. 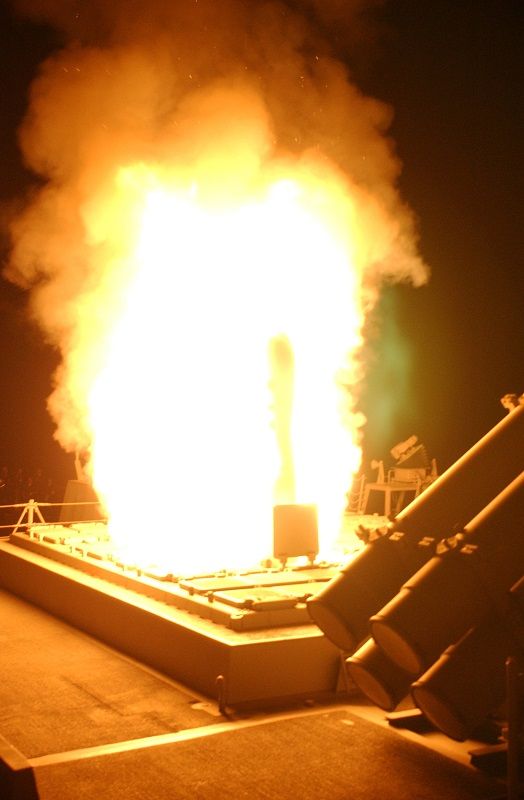