The Colombian Navy (ARC) has received two new BRF-230 low draft river combat boats as part of a project to boost its capacity for riverine control and protection of vulnerable populations.

The two boats, built by the Cotecmar shipyard, are part of an eventual total of eight planned.

They were delivered to ARC Marine Infantry Battalion No 52 in Arauca, in the presence of Colombian Defence Minister, Diego Molano and other military and local officials. Built of high strength aluminium the boast features level 3 ballistic protection and has the capacity for 20 fully-armed and equipped Marines.

In addition, five floating piers will soon be delivered to the department of Arauca, part of a project to improve the infrastructure for the Arauca River, in an inter-administrative cooperation agreement between the Ministry of Defence, the Colombian Navy and the Arauca government. The five piers will feature varying capacities: one is a type E, with docking capacity for four boats; one a type C for two boats; and three type A piers, to be located in the city of Arauca and the townships of La Reinera, Puerto Lleras and Puerto Contreras. 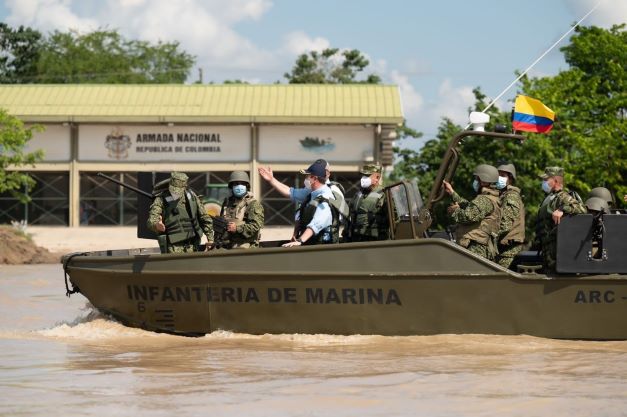 The BRF-230 boat delivered to the Colombian Navy. (Photo: Cotecmar)