Having received the first of two Boeing 737-732s, purchased second hand at the end of last year, the Colombian Air Force (FAC) is reinforcing its jet transport fleet, while simultaneously replacing its last Boeing 727-200, recently deactivated.

The newly-delivered Boeing landed on Colombian soil for the first time at Sand Ansdrés Islas airport on 21 April. The second aircraft has yet to be delivered – both have been in service with Delta Airlines in the US since 2009. The FAC currently operates a 737-74V as a presidential transport, a 737-4S3S and a 737-46BF, operating with the Comando de Transporte Aéreo Militar (CATAM, Military Transport Command) in Bogotá. In addition, the service operates a single KC-767, modified in Israel as a tanker, for long-range transport and in-flight refuelling.

One of the two 737s will be modified for electronic intelligence (ELINT) missions, with Elbit Systems to supply $.9 million worth of pertinent equipment. Although the exact nature of the equipment has not been confirmed, it is likely that the firm’s Air Keeper system – already in service with the FAC on a CN-235 dedicated to EW missions – will form the core capability. 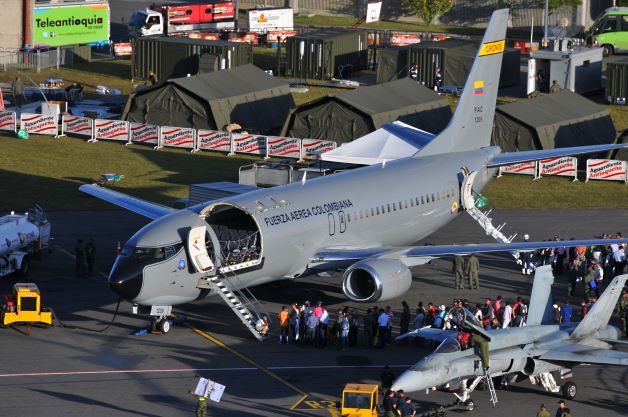