Let me tell you something about a really nice knife: The TX399 from Coast‘s Spec Ops collection. For those who don‘t know, Coast is a Portland, OR/USA based company, founded in 1919, that produces knives, multi-tools and flashlights.

I’ll rattle through the cold facts before I tell you why I fell in love with the TX 399.

The TX399 is a double-locked, one hand folding knife, weighing 105 grams. Its overall length is 22,9cm opened, 12,7cm closed with a 9,9cm blackened blade made out of 9CR18MOV-steel. This is a very popular steel for knives, because it holds an edge quite long and can be sharpened easily. The blade regular edge runs for approx. two thirds of the length from the tip, after thay it‘s serrated. The handle is made out of napped nylon. The TX399 sells for around 40€.

Utilising Coast’s Double Lock technology, anyone can work with confidence knowing that the added safety prevents the knife from accidentally closing. This means that the liner-lock, once it‘s engaged, can be fixed with a second locking mechanism at the back of the knife to make it almost impossible to close the knife.

The opening stud and the belt clip both can be adjusted to your personal carrying and opening style, making this knife ambidextrous. The knife comes with two tools: one to do the aforementioned adjusting with, the second to adjust the tension of the double-lock. That means how hard you have to push/pull the stud that opens or closes the double lock.

These are the cold facts. Now, I have two reasons why I think the TX399 is a very impressive knife.

First: it fits my hand like a glove. I put the belt-clip on the other side of the knife, so it doesn‘t rest in my palm when I use it, and every time I open it, my thought stays the same: “Man, this knife feels good!“

I have been using it for a lot of things by now and it does great. I even managed to “saw“ off bigger branches with the serrated part of the knife. I know that is not its intended purpose and to be honest it took a while, but I did it anyway, just for the fun of it. I even used the TX399 for some bushcrafting style activities and since the blade is pretty thick it performed better than most folding knives I have used in similar situations. The edge remained supersharp for a really long time, which is great for longer trips or you didn’t bring any sharpening tools.

The second reason is because the TX399 is just a mean, nasty, badass looking knife! It‘s probably one of the best looking knives out there and definitely the best looking one I own. The shape of the blade (blackened, of course, since it‘s a Spec Op design!) paired with the serration and the handle…this knife just looks awesome. Most good looking things do not work properly and a lot of things just designed for function look terrible. The TX399 is the whole package, good looking plus great working.

The only thing, that kept me from giving it a straight 10 out of 10 is that the first millimeters of the opening mechanism seem to be a little too soft. It can be opened very, for my taste maybe even too, easily. Other than that, finding a better knife for that prize will prove to be quite the challenge. 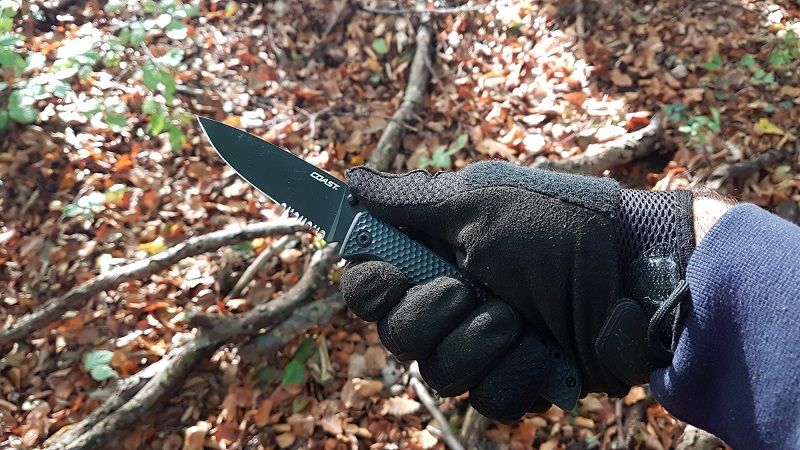