CAE to Support US Navy Chief of Naval Air Training

CAE USA recently won a number of contract awards which has increased the company’s footprint in the United States. These contracts consist of the US Army ABRAMS M1A2 tank engine trainers, US Air Force C-130H Aircrew Training System (ATS) and a contract to provide the Chief of Naval Air Training (CNATRA) with Contract Instruction Services (CIS) that will support the delivery of ground-based training to the US Navy.

Awarded in April 2018, the CNATRA CIS programme provides classroom and simulator instructor support services for the primary phase of naval aviation training, which is the start of training for all future Navy pilots. The CNATRA CIS programme also supports intermediate and advanced strike training, which is the training pipeline for future fighter and attack aviators; and Naval Flight Officer (NFO) training, which provides the basic training for operating the advance systems onboard naval aircraft. The five-year contract, which was awarded as a base contract with four one-year options, is valued at approx. U$125 million.

MONCh was invited to visit with the Commander, Training Air Wing 6 (CTW-6) at NAS Pensacola. The Wing is responsible for all CNATRA NFO training and production, and graduates approx. 300 students annually from the US Navy, Marine Corps, and international students from Germany, Singapore, Saudi Arabia and Norway.

Speaking to journalists was Commodore Scott Janik, CTW-6, who said: “The uniqueness of Training Air Wing 6 is that we graduate every single student that we have come in the door. We have instructors from every community out in the fleet, and we take every student through our primary, intermediate, and advanced training syllabus. We have an academic environment that does not live by academic rules – we are a continual motion machine where every two weeks we check-in a new class, and at the end of every month, if not twice a month, we’re graduating students.”

CTW-6 is comprised of three separate training squadrons: all students start at Training Squadron TEN (VT-10), after which students are directed to either Training Squadron FOUR (VT-4) or Training Squadron EIGHT-SIX (VT-86) depending on whether they go to ‘big wing’ aircraft, or to tactical aircraft, respectively. Together, the mission is to conduct all Primary, Intermediate and Advanced Student NFO (SNFO) training. This training, is supported in large part by CAE as they provide Contract Instructor Services who conduct both academic and simulator instruction.

Additionally, CAE is responsible for providing CNATRA and CTW-6 with one of the latest Live, Virtual, Constructive Training (LVCT) devices in the company’s inventory – the Multi-Crew Simulator (MCS). This high-fidelity training device, along with the T-6A Operational Flight Trainer (OFT) and the T-45C Virtual Mission Training System (VMTS) OFT, make CTW-6 the premier CNATRA Training Air Wing for technology-based instruction.

“We have in the vicinity of 325 contract support personnel at Pensacola, so we’re almost at a one to one ratio of students to contract support, and that really underscores the criticality of our partners from industry. CAE is a big part of that,” said Commodore Janik. “VT-4 is a simulator driven squadron, and that’s where CAE and the MCS [Multi-Crew Simulator] is really critical in being able to mimic what the students will see when they get to the fleet.”

The Undergraduate Military Flight Officer Multi-Crew Simulator (UMFO MCS) training system was developed by CAE to provide US Navy student flight officers with the knowledge and skills required prior to assignment in an operational platform such as the P-8A, E-6B, P-3C, E2-C, EP-3 and others. The student flight officers use the Multi-Crew Simulators for a range of training tasks, including: command and control, electronic warfare, navigation, sensor operations and weapons employment. To develop the UMFO MCS for the US Navy, CAE leveraged its existing mission crew trainer (MCT) and tactical mission trainer (TMT) product line, which is in use by air forces and navies around the world, including the Royal Navy, Royal Canadian Air Force and Swedish Navy.

“Our vision is to be the recognised global partner of choice, and that’s not just with the customer, but also with our industry partners and subcontractors. We’re at 160 locations around the world, and enhancing safety, efficiency and readiness is what we’re all about,” said Ray Duquette, President and General Manager, CAE USA. “We have demonstrated our capabilities to the navy on the T-44C programme as a world-class provider of comprehensive training solutions and services, and with CNATRA CIS we’re proud to expand our support of the primary and advanced flight training that will produce future naval aviators for the US Navy. A key component of that is the MCS, which we build in our Orlando facility, leveraging engineering support from Tampa.”

The MCS consists of a generic unclassified multi-screen mission station replete with joystick controller. The MCS presents flight instruments, navigation systems, sensors, communications and datalink suites to the SNFOs. The simulator is supported by a two-place instructor station which is manned by CAE instructors and US Navy instructors. The MCS is a critical component to help redefine the traditional NFO skillset from navigator to a full-time sensor, mission, and information manager, which is essential for today’s modern multi-mission aircraft.

The MCS is used in the Advanced Maritime Command and Control (MC2) training period, which lasts 15-18 weeks and consists of three distinct strands which ultimately lead SNFO’s to the E-6, E-2, and P-3 and P-8 aircraft. The simulation capability presented by the MCS prepares SNFOs quicker and in a cost effective manner, and delivers students with high readiness capability prior to entering their assigned fleet aircraft. Approx. 140 SNFOs are produced annually at NAS Pensacola. 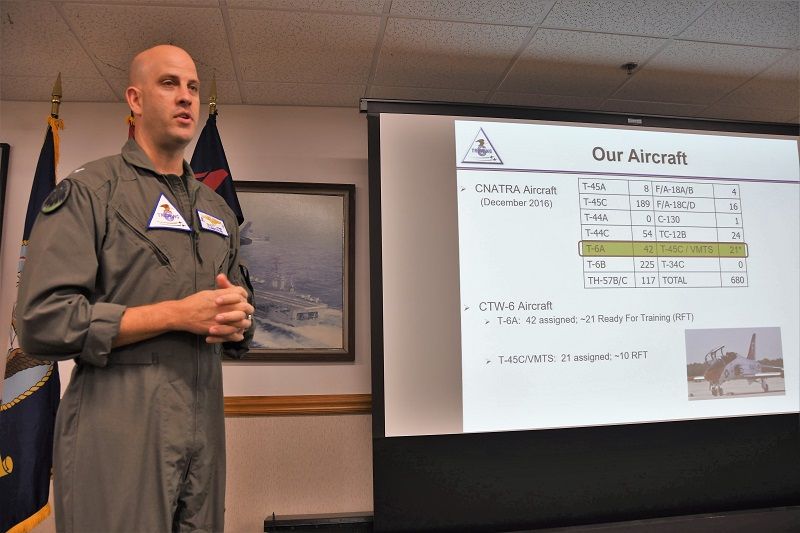