Gamma radiation consists of high-energy photons that interact with electrons, Zhang explained. In a typical silicon Metal Oxide Semiconductor Field Effect Transistor (MOSFET), the source and gate sit on the top surface and the drain on the bottom surface. “The gate electrode is separated from the channel by a thin silicon dioxide layer. In silicon-based MOSFETs, the gamma radiation knocks electrons out and leaves behind positive charge traps in the gate oxide. These positive charges reduce the threshold of the device until the transistor goes from normally off to normally on.”

EPC Space’s eGaN devices are built very differently from silicon MOSFETs, he said. “Gates are located on the top surface. Like a silicon MOSFET, conduction between source and drain is modulated by biasing the gate electrode from zero voltage to a positive voltage. The gate is separated from the underlying channel by an aluminium gallium nitride layer. This layer does not accumulate charges when it is subjected to gamma radiation.”

EPC subjected its eGAN transistors to 500 kilorads of gamma radiation and measured the leakage currents from gate to source, the threshold voltage and all the resistances of the devices at various checkpoints, confirming that there were no significant changes in device performance. “We have since taken devices up to 50 megarads, confirming that eGAN devices will not be the first parts to fail due to gamma radiation in any space systems.”

Under neutron radiation, he explained, high-energy neutrons scatter off atoms in the crystal lattice, causing defects. However, the impact of neutron radiation on GaN crystal – and even the entire device structure – is minimal, because GaN has a much higher displacement threshold energy than silicon.

While eGaN devices are susceptible to heavy ion bombardment from galactic cosmic rays and solar particles, which create a high transient electrical field across the gate oxide, causing gate rupture, it does not happen with 40-100V devices at linear energy transfer (LET) figures up to 85 LET, company testing showed. In 200V devices, the first failures occurred at 190V and 85 LET, and in 300V devices at 310V and 85 LET. 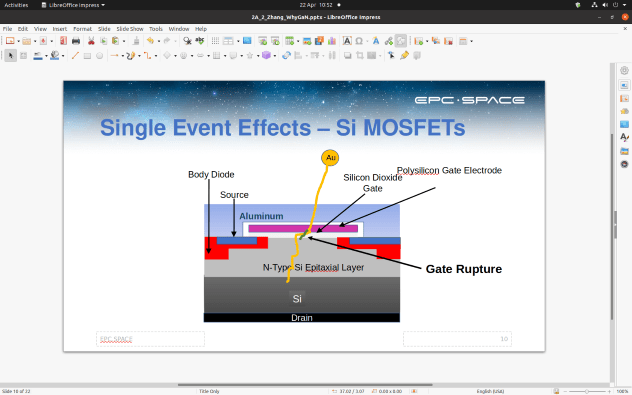