Clouds in the Sky

Leonardo has announced via a press release that the Royal Air Force’s (RAF) new BriteCloud Radio Frequency (RF) countermeasure has been cleared for operational service onboard the RAF’s Tornado-GR4 combat aircraft fleet.

The countermeasure will be used by the aircraft’s Saab BOZ-107 chaff and flare dispenser. BriteCloud, which the company says has similar physical dimensions to a soft drinks can, has been designed specifically to be deployed from standard chaff and flare dispensers. The innovative design is effectively an active countermeasure which emits RF signals as soon as it is launched, performing the electronic attack of an incoming Active Radar Homing (ARH) Surface-to-Air or Air-to-Air Missile (SAM/AAM).

Although both Leonardo and the RAF have refrained from publishing details regarding the BriteCloud-55’s performance, it is possible that the decoy emits RF in the millimetre waveband, typically in wavebands upwards of 30 gigahertz/GHz in Ka-band (33.4GHz to 36GHz), which are commonly used for ARH-guided AAMs and SAMs. Meanwhile, the electronic attack approach vis-à-vis Semi-Active Radar Homing AAMs/SAMs will continue to focus on the dispersal of chaff by the aircraft, given that the combat aircraft radars, and ground-based fire control radars used to provide missile guidance to this end tend to operate in lower wavebands where chaff continues to be effective.

At the operational level, the advent of BriteCloud-55 is arguably driven by the continuing proliferation of ARH SAMs/AAMs by near-peer adversaries around the world, notably the Peoples Republic of China which has developed and fielded the China Precision Machinery Import-Export Corporation HQ-9 family of ARH SAMs, and Russia’s Almaz-Antey S-400 Triumf SAM system which includes pure ARH-guided missiles in the form of the 9M96/E2 and 9M96E. As of 2017 two S-400 batteries had been deployed to support the Russian presence in Syria notably protecting Humaymim airbase and close to the city of Masyaf, both in the northwest of the country, the latter location believed to be home to an important Syrian Army base. The RAF has deployed Tornado-GR4s in support of Operation SHADER; the British contribution to Operation INHERENT RESOLVE, the US-led effort directed against the Islamic State of Iraq and Syria, potentially placing such aircraft within the S-400 threat envelope. Meanwhile, although the Tornado-GR4 is expected to retire from RAF service from 2019, BriteCloud family countermeasures will equip the force’s Eurofighter Typhoon-F/GR4 Saab BOL-510 countermeasures dispensers, and the decoy will also be made available for all variants of the Saab Gripen combat aircraft family. This will add vital ARH protection to both aircraft which will spend much of their service lives facing ARH-guided threats, both in the form of weapons systems such as those discussed above, alongside new ARH-guided missiles as and when they enter service in the future. 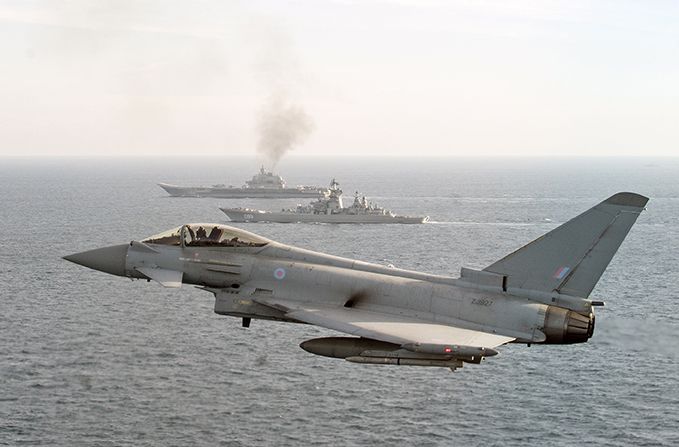