Record numbers of aircraft from China’s People’s Liberation Army Air Force (PLAAF) entered Taiwan’s Air Defence Identification Zone (ADIZ) between 1-4 October, according to reports from Taiwan’s Ministry of National Defense (MND). A total of 149 PLAAF aircraft have been observed entering the ADIZ, before returning to the mainland.

The first sign of an increase in the frequency and scale of incursions came on 1 October, which is the PRC’s National Day and a politically important date. Taiwan’s MND reported a total of 38 PLAAF aircraft, including J-16 multirole fighters, H-6 strategic bombers, and a KJ-500 airborne early warning and control aircraft had entered its ADIZ. A nearly identical incursion occurred the following day, with a night incursion following. A smaller flight of 16 aircraft conducted a single movement on 3 October.

On 4 October, the first flight consisted of 52 aircraft, including 12 H-6s and 34 J-16s. A further four aircraft followed later in the day. Taiwan scrambled its own aircraft and transmitted radio messages warning the PLAAF off throughout the incursions, the MND stated.

The flight paths indicated by the MND suggest the PLAAF flights are particularly routine and predictable. Each map depicts more or less the same ingress and egress routes. “The PLA is nearing the end of this year’s training cycle and going out with a bang, so to speak,” Bonnie Glaser, Director of the Asia programme at the German Marshall Fund in the US, said on Twitter on 4 October. There is a possibility therefore, that the flights are part of a training cycle, albeit one intended to serve a politico-military purpose.

The Global Times, a PRC state-owned news outlet, took the opportunity to publish an opinion piece on the events, in which the author referred to the events as “as a form of the National Day military parade in the Taiwan Straits, which used to be held at the Tiananmen Square in Beijing.” It added that the aircraft were dispatched from different airfields in China, demonstrating the PLAAF’s ability to form a single fighting force from multiple locations.

Whilst typically a mouthpiece for Beijing’s propaganda, the Global Times may be close to signaling the heart of the matter as far as the ADIZ incursions are concerned. Any attempt to retake Taiwan by force would necessitate a leading role for the PLAAF, which presents a challenge for the PLA ,as the ground forces have always held the role of senior service. That the PLAAF appears to have been the National Day parade for 2021 is indicative of its growing importance within China, and is linked to its increased authority and ability to conduct operations at a level commensurate with Beijing’s ambitions. 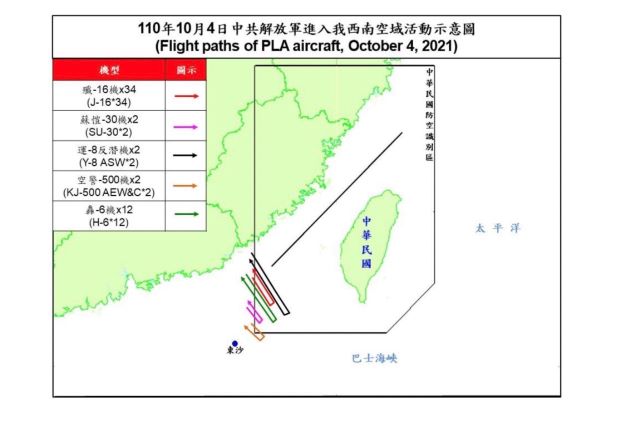 Taiwan has reported a record number of PLAAF incursions into its ADIZ over four days as China celebrates its National Day. This image shows the routes taken by 52 PLAAF aircraft on 4 October. (Image: Taiwan’s MND)