Chinese state-owned media revealed on 6 January that a variant of the Dongfeng Mengshi CTL181A 6×6 protected vehicle fitted with an integrated mortar system has been developed for use by the People’s Liberation Army Ground Force (PLAGF).

As part of its ‘National Defense Science and Industry’ programme, the China Central Television 7 (CCTV 7) channel released video footage of the new self-propelled mortar (SPM) system – the designation of which was not disclosed – conducting live firing trials.

A 120mm muzzle-loaded smoothbore mortar is mounted in the cargo area of the vehicle, capable of firing guided and unguided munitions. It features a semi-automatic loading system fed from a crew-served loading tray. CCTV also stated the weapon features an “advanced” fire-control system, which likely referred to a network-enabled automated fire-control system with automatic gun-laying capability. No information was provided regarding maximum rate of fire or range.

Produced by Chengdu Lingchuan Special Industries Co, the weapon is also being considered for export markets, stated CCTV, which suggests the mortar can also be mounted on other vehicle types, including possibly 4×4 vehicles, such as a modified Dongfeng EQ2050. The programme also revealed a new 120mm guided mortar round, presumably intended for use with the new mortar system. The designation has not been fully confirmed, as only the letters ‘CS/BME’ were visible in the footage.

This new round features GNSS guidance and, according to computer graphics shown in the programme, performs course corrections via a ring of lateral thrusters positioned near the middle of the main body, presumably at the longitudinal centre of mass. The round was shown in tests being used to engage a mock infantry position and, according to the testers, landed just 75cm from the point of aim.

The PLAGF is known to operate a mortar-carrying variant of the CTL181A. However, unlike the latest example, that system does not allow for the weapon to be operated from the rear of the vehicle. Instead, the mortar is stored on the vehicle in a disassembled state, with tube, bipod, and baseplate separated when on the vehicle. In operation, a crew of four must retrieve the individual components and quickly assemble the mortar, after which they are free to conduct their fire mission. When repositioning, the crew must then disassemble and embark the mortar before being free to relocate. This requirement necessarily generates longer into-action and out-of-action times than self-propelled mortars.

The PLAGF has been using the CTL181A as the baseline platform for several new systems, with notable recent examples being a self-propelled howitzer, commonly referred to as the PCL-171, and a new bridging system. The use of this platform for the new SPM system continues the trend of the CTL181A as a common workhorse for various light roles within the PLAGF, providing good economies of scale for manufacturing and allowing greater commonality in spare parts, logistics, and training. 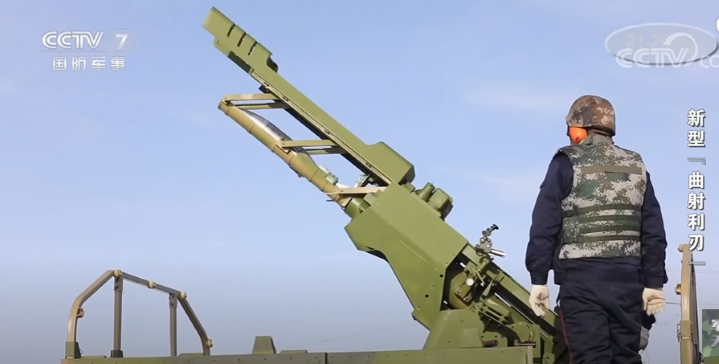 The new mortar system as revealed on a CCTV 7 broadcast. (Screengrab from CCTV 7 footage)