One Weibo user referred to the J-16D as the ‘Howling Wolf.’ It can be identified by the wingtip EW pods, as well as the absence of a cannon or infrared search and track (IRST) system on the nose. It is understood to carry an AESA radar optimised for offensive EW missions, as well as anti-radiation missiles and long-range air-to-air missiles for self-defence.

According to a 2020 paper published by the London-based Royal United Services Institute (RUSI), the J-16D is expected to perform a similar role to the US Navy’s EA-18G GROWLER – which provides escort jamming for F/A-18 formations, as well as stand-off jamming and deception of enemy radars. Three EA-18Gs can be used to provide targeting information based on electro-magnetic signals. In theory, this enables the aircraft to detect a target from a stand-off range passively, and to conduct an engagement without revealing their own EM signature.

China is known to be developing its air force towards being able to conduct passive engagements. This is seemingly based on the understanding that, despite considerable developmental effort, the PLAAF is still technologically behind its peers and neighbours – such as the EA-18G operators, Australia and the USA.

Nonetheless, the presentation of the J-16D, alongside a number of other PLAAF developments, suggests that the force is rapidly moving towards the ability to challenge an opponent using passive detection and targeting methods. These tactics, techniques and procedures have traditionally been the reserve of the US. 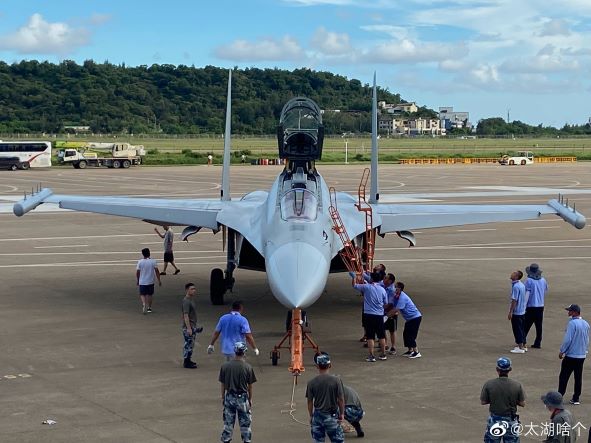 Images have emerged of an EW variant of China’s J-16 heavy multirole fighter – the J-16D. The aircraft is expected to better equip the PLAAF for operations against technically advanced opponents. (Photo: via Weibo)