At late March Chinese social media image shows an Z-10ME in flight carrying missile approach warning (MAW) sensors, as well as new IFF and directional infrared countermeasure (DIRCM) systems. Also shown was a mast-mounted, millimetre-wave (MMW) radar – the first time such a radar type has been seen on the type – and a different model from that seen on PLA Z-19A helicopters. The latest Z-10ME also appears to feature additional armour protection, similar to the externally-attached armour on the latest PLA Army Aviation Z-10As, and a larger magazine – in addition to a new weapons package that seems to include not only the regular KD-10 but also the CM-502 ATGM. The new variant features redesigned engine air intakes for reportedly more powerful engines, as well as engine exhaust outlets facing upwards, to reduce IR signature.

The improved helicopter was not painted in PLA livery but, rather, in the same camouflage pattern used for the prototype, displayed at Airshow China 2018.

The photograph emerged as rumours spread that the Pakistani Army may be interested in the Z-10ME, after experiencing difficulties in acquiring T129-series attack helicopters from Turkey, due to sales restrictions on the helicopter’s US-made LHTEC CTS800-4A engines.

Meanwhile, two subsidiaries of state-owned Aviation Industry Corporation of China (AVIC) revealed on 3 April they have conducted the first flight of a newly developed helicopter for the Chinese army. Few details have emerged, but project development is known to have been launched in March 2019 by CAIG and the China Helicopter Research and Development Institute.  In a social media announcement, the institute said the self-funded project was launched to “break the limitations of conventional aerodynamic design, enhance the performance and combat capabilities of helicopters, promote technological innovations, and optimize development models in the helicopter industry.”

According to the Global Times newspaper, the successful development of this type, which might have a completely different aerodynamic design from most current rotorcraft, could result in the PLA’s next-generation, high-performance helicopter. 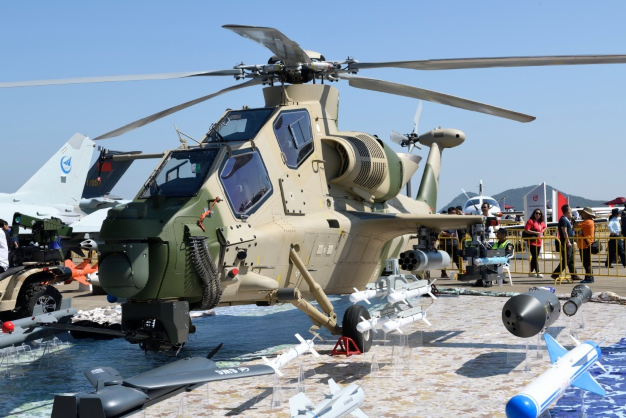