The PLAN has also released video footage showing the launch of what appears to be a new anti-ship ballistic (ASBM) missile from a Type 055 destroyer. The weapon resembles the ground-launched, short-range CM-401, though it is not clear whether it is already in active service. Renshais have 112 VLS cells and can carry a wide range of weaponry, from anti-ship cruise missiles to SAMs, torpedoes and ASW systems. Pentagon assessments hold that they are likely to carry land-attack cruise missiles and ASBMs when these become available. At least two more Renshais have been launched and are expected to enter service soon.

Video footage has also emerged showing two Z-20 helicopters taking off from a Type 055 destroyer. One appeared to be a naval utility variant, while the other was an ASW-capable version, fitted with a distinctive disc-shaped belly radome: they are Z-20 is expected to operate from a range of vessels.

Another video hinted that China’s third aircraft carrier, which will feature a number of advanced technologies such as electromagnetic catapults, will be launched later this year. Computer-generated imagery also showed the CATOBAR-type carrier embarking what appear to be a variant of the FC-31 multirole fighter, which is still under development.

This comes as Shandong, the country’s second carrier, and the first one to be built locally, undergoes its first scheduled refurbishment. According to state-owned Global Times, the move is expected to enhance the ship’s capabilities after more than two years in active service. The procedure could involve applying a new non-skid coating as well as repairs and upgrades for some of the subsystems. Commissioned in December 2019, Shangong is a STOBAR-type carrier derived from China’s first carrier, the Kuznetsov-class Liaoning. 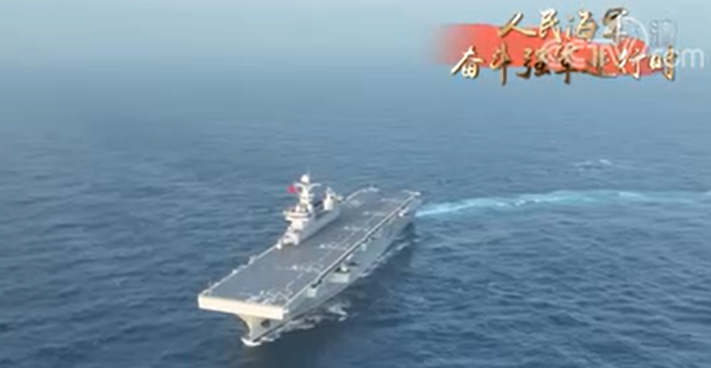