All Areas of Bilateral Cooperation to be Reinforced

China and Iran have agreed to expand all areas of bilateral co-operation, including defence ties, amid heightened tensions with the United States.

The agreement was reached during a 27 April meeting in Tehran between Chinese Minister of National Defence, Gen Wei Fenghe, and Iranian President Ebrahim Raisi. During the meeting, Gen Wei was quoted by Chinese media as saying that the People’s Liberation Army (PLA) “is willing to maintain [and expand high-level] strategic communication with Iran, make good use of the co-operation mechanisms, and boost pragmatic collaboration so as to lift the bilateral military ties to a higher level”.

Noting that military-to-military co-operation between the two countries “has been expanding in recent years,” the minister said Beijing and Tehran have also reached a consensus on deepening military exchanges, as well as conducting joint exercises and personnel training. He also stated that exchanges held since last year between Raisi and his Chinese counterpart, Xi Jinping, have led to “new progress” being made in the ‘25-year Iran-China Strategic Cooperation Agreement’ the two sides signed in March 2021.

The Chinese minister, who also met that day with Iranian Defence Minister Mohammad-Reza Ashtiani and the Chief of Staff of Iran’s Armed Forces, Mohammad Bagheri, said his visit demonstrates Beijing’s firm support for Iran “in safeguarding state sovereignty and national dignity”, adding that China “stands ready to work with Iran to cope with various risks and challenges.”

President Raisi said the two countries share similar positions and support each other in international affairs, while expressing gratitude to China for its “long-term support and assistance during Iran’s difficult times.”

Ever since the US withdrawal in May 2018 from the Joint Comprehensive Plan of Action (JCPOA) – also known as the ‘Iran nuclear deal’– Beijing has been strengthening, ties with Tehran. Some analysts view the growing Sino-Iranian co-operation as a potential threat to the security interests of the US, Israel, and the Arab states of the Persian Gulf. 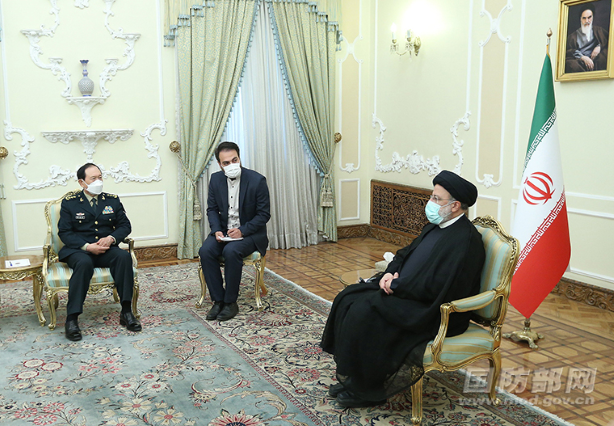