We Will Never Stop Pushing

[Launching an occasional series of intimate discussions with CEOs around our industry, MON recently sat down with Saab’s chief and discovered more about what makes this intriguing company tick. The interview appears in MilTech 2-2021, published on 31 March.]

Micael Johansson is President and CEO of Saab, the defence and security technology group that continues to be an enigma: just when you think you fully understand the group, its component businesses and nuances, you turn a corner and – förvåning – there is another product, service or capability. Developing a cohesive business plan from such a diversified base – and sustaining it through an entirely unanticipated and far-reaching global health crisis – takes a mixture of vision, leadership and competence – not just from the top of the organisation but at every level. Fresh from presenting the company’s annual results, Mr Johansson found time for an in-depth discussion with MilTech, revealing much of the ‘secret sauce’ that makes Saab tick in the frank and comprehensive nature of his responses to a wide range of questions. But ‘sitting on laurels’ does not appear to be in the man’s nature: read on…

MilTech: Aircraft, submarines, weapon systems, sensors, air defence systems, complex electronics, training solutions – is there much you do not already cover? What is next for Saab?

Micael Johansson: The main thrust is to grow the company – we really need to keep on our toes embracing technology, of whatever nature, to find, address and win opportunities. But we also concentrate on our core areas, of course – underwater systems, advanced weapons, sensors, command and control aircraft, among others. We have to invest the time and resources to be able to find and capture new revenues: but we do need to be careful – disruptive technology can be beneficial, and sometimes it can simply be disruptive.

You ask where do we go from here. We obviously have to maintain our operational efficiency – but to be honest we have a significant number of quite large programmes running at the same time. That means we need to pay attention to our productivity – which could be higher. We will always have a hub in Sweden – but we are targeting growth and building on our existing industrial capabilities in key markets – the US, UK, Australia, Germany, Finland and Brazil among them. Wherever we can create IP, in fact. And benefit from knowledge transfer – an expression I prefer to ‘transfer of technology.’ We need to become ‘multi-domestic.’

MilTech: Is Saab lean and aggressive enough, organisationally, to compete effectively in an ever hungrier, competitive world?

MJ: Well – we will never stop pushing. That is a given. I truly believe we are lean and quite aggressive; I also think we are agile and have shown the world what we can do. We have won some big programmes, on which we are delivering – to both customer and our satisfaction. But you can never relax. We put lots and lots of effort into developing and maintaining our competence – and passing that on to our customer base as benefits.

MilTech: Peter Flory, former NATO Assistant Secretary-General for Defence Investment, once said “Sweden is the best member nation NATO doesn’t have.” What are the advantages and disadvantages of being Swedish (or being seen as Swedish) in the world you operate in?

MJ: If that is a political question, then politicians should answer it. But from an industrial perspective it is an interesting one. Being neutral and outside the NATO context is a slight issue, because in most cases our equipment and solutions need to be compatible with NATO standards. Interoperability is one of the great issues all armed forces seek to resolve. As a nation we do this pretty well – in exercises with NATO forces, for example.

I really think we are as competitive as anybody in the marketplace. But it is a complex market we operate in and there are always differences of opinion, interest or national requirements. Workshare, for example, can be an issue in some programmes and can often take a great deal of negotiation to arrive at ‘win win.’ Which, again, is a completely political question. We know we have value we can add in large system programmes, but sometimes it is difficult for us to step in. Lines are often drawn in advance and it can be difficult to influence what are often purely national discussions. But we seem to succeed quite often by approaching opportunities on the systems level first.

MilTech: What limitations do you see on the horizon? If none – then where do you venture first?

MJ: To be honest, I don’t see that many limitations, although there are certainly things we need to address. Limitations from a technology standpoint? Absolutely not! But there are things that derive from technology that we need to think carefully about. Look at the whole spectrum of discussion around artificial intelligence and cloud computing, for instance. There are some very robust ethical conversations we need to have around those sorts of subjects. That is a critically important issue.

Also, the whole question of embracing commercial technology and making it sufficiently secure for the demands of the customer base we serve. We need to pay particular attention to preventing the uncontrolled exploitation of technology to prevent it finding its way into the wrong hands. There are challenges and opportunities in every direction in turn. But very few real limitations.

MilTech: Partnership has obviously been important to Saab – is it a perpetuating theme?

MJ: I think it is hugely important – and completely ‘win-win.’ We can’t build everything from our country – we simply don’t have the access to people – we don’t have the population. So, we need to find the gap, if you like, where we can add value. The Boeing cooperation is a very good example. Would we have been able to build an aircraft to meet the requirement? Probably, I think, the answer is yes. But would we have been able to penetrate the market without the expertise, cachet, presence and wholehearted collaboration of Boeing? Doubtful, I think…

We embrace partnership everywhere that it makes sense from a business perspective. Spreading the risk, sharing investment, learning new techniques – all of that is a sensible approach. It has quite simply become too expensive for every opportunity to be addressed through solo investment.

MilTech: Many of the major suppliers in the defence, security and aerospace worlds are growing (or trying to) through acquisition. Is this a business model you find attractive? Can you talk about plans or non-specific opportunities?

MJ: Well, there are certainly some opportunities for consolidation in Europe – the exact degree to which that is desirable, or even possible, depends on who you talk to. But the well-known EU perspective sometimes sees wasted effort and duplication in some important sectors. The desire is for fewer product champions, which has good and bad aspects. Initiatives such as the EDF [European Defence Fund] are driving a degree of consolidation, which is mostly beneficial: but the initiative is still young and we will have to see as to where exactly it is going.

Partnerships are good. Sometimes very good. But let’s not neglect the potential that M&A [mergers and acquisitions] could bring. We are growing organically – that’s for sure. But continued international expansion, which is the direction of the road we need to be following, may demand different views – and different perspectives. I’m open to suggestions…

As I said earlier, I believe we are structured and agile in the way we conduct our business development strategy which has three legs, so to speak: international expansion, which is a constant driver; a bit more focus on what we do well in the current portfolio, thereby generating the financial muscle to allow us to find and support more business; and continual investment in new technology.

MilTech: Thank you. From the top of the mountain, you can see for miles!

[The more opportunities MilTech has to talk frankly to senior executives and stakeholders in our community, the more obvious one thing becomes, to the point at which it seems to be a blindingly obvious truism. The business of complex business is simple. Not so simple that anybody could do it. But simple enough that strategies to win, to expand, to grow, can be simply expressed – and communicated. That is, perhaps, one of the marks of leadership.] 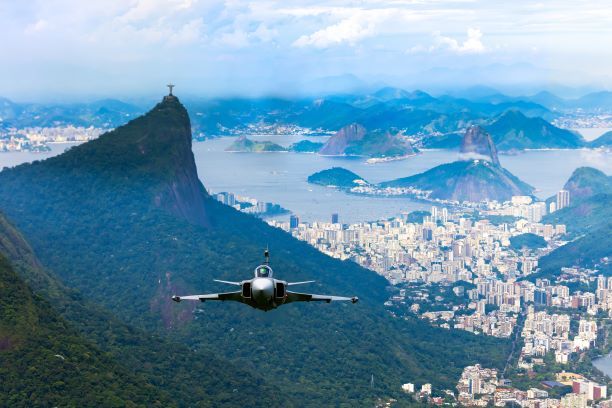 Few – if any – of Saab’s many large-scale projects better showcase its range of capabilities and its underlying philosophy than the successful GRIPEN collaborative programme with Brazil. (Photos: Saab)