John Bryant – a former US Marine Corps Colonel with a mere 28 years’ distinguished service behind him, including time as Program Manager, Combat Vehicles – has been President of Oshkosh Defense since June 2016. He has thus presided over the company – and been responsible for ALL its vehicle programmes – during an intensely busy and fulfilling period in its history: producing literally thousands of Joint Light Tactical Vehicles (JLTV) for the US and allied armed forces. He found time recently to talk to MilTech Editor-in-Chief, Tim Mahon, for the recently-launched series of CEO Chats.

MilTech: How transformational has the JLTV contract been for Oshkosh? Have there been radical changes as a result?

JB: I think it’s has been transformational for tactical wheeled vehicle in general, to be frank. In the early 2000s, vehicles were having real problems in counterinsurgency (COIN) operations – the DoD response was the mine-resistant, ambush-protected (MRAP) vehicle. It then became apparent that what the military really needed was a light tactical vehicle with capability across the full spectrum of conflict. JLTV, in reality, completes the trend started with our M-ATV [MRAP All Terrain Vehicle] – effectively, it is a blurring of the lines between tactical wheeled vehicles and combat platforms.

Thirty years ago, a tactical wheeled vehicle was basically a robust, off-road-capable truck. It was built using pretty traditional automotive manufacturing techniques. Now, JLTV has changed all that: it has extreme cross-country mobility, embarks often highly complex C2 suites, carries a variety of weapons up to 30mm cannon and anti-tank missiles – and is now available in over 120 separate configurations! It is a flexible, agile and cost-effective system that has been transformational in its effect.

The vehicle is a response to the developing requirement for a rapid increase in protected mobility, but in ever-smaller packages. People truly thought at the time that the mix of requirements made the programme unachievable: we proved them wrong. We may be right on the ‘hairy edge,’ but we have achieved what the customer wanted, though it is still challenging from time to time. When we were producing the M-ATV, we went from building zero to 1,000 a month in just six months – while continuing to build medium and heavy wheeled vehicles for DoD. It is the nature of the programme that has been different: building the JLTV fleet is a very, very different thing from a normal automotive manufacturing enterprise.

MilTech: With a JLTV recompete looming on the horizon, how sanguine are you about retaining the contract? What advantages do you feel you have as the incumbent?

JB: When we won the contract in 2015, we knew we would have to win it again. And that is, quite simply, no problem. Every single one of our manufacturing programmes is one we have won. We are very confident in our ability to provide the solution the user needs at a very competitive price. Our advantages are simple, too: we designed the vehicle, we know it inside out – and we have built in excess of 10,000 of them.

MilTech: Looking at the Army’s Cold-weather ATV (CATV) programme, you have partnered with ST Engineering to address this opportunity. Can you give us some detail?

JB: We have partnered with ST Engineering to offer a vehicle based on their BRONCO family of ATVs – versatile, transportable vehicles with superior growth potential. What will come out of this partnership will be a tailored variant, focused on an entirely soldier-centric design. The programme itself has basic requirements – and our solution meets them with ease. Our thinking has been focused on what the soldier actually needs – the ability to conquer 80% of the world’s most difficult terrain, in temperatures from -49 to +120°F, with the ability to reconfigure the vehicle very rapidly. In fact, the rear cab of the BRONCO can be reconfigured by two soldiers in just a couple of minutes. It is a rapidly evolving, tailored solution that involves no high-risk component change to meet – and exceed – the end-user’s requirements.

MilTech: What’s next for Oshkosh? Where do you see the company’s growth and continued success coming from?

JB: Well – our mission will not change. But we lose our competitive advantage if we cannot adapt to the changing demands of the customer. The US National Defense Strategy pivots us to operating a near-peer defence, so JLTV in the future has to manoeuvre – and survive – against a near-peer adversary. This has to happen against a backdrop of severe budget pressures, which means we also need to be able to deliver a very high quality production line quality and efficiency – regardless of order quantity. And looking further out – the customer is going to require true autonomous capability – something we have been working very hard on for over a decade.

MilTech: And that is something we look forward to learning more about – but is a story for another day. Meanwhile, thank you for a privileged view inside Oshkosh Defense. 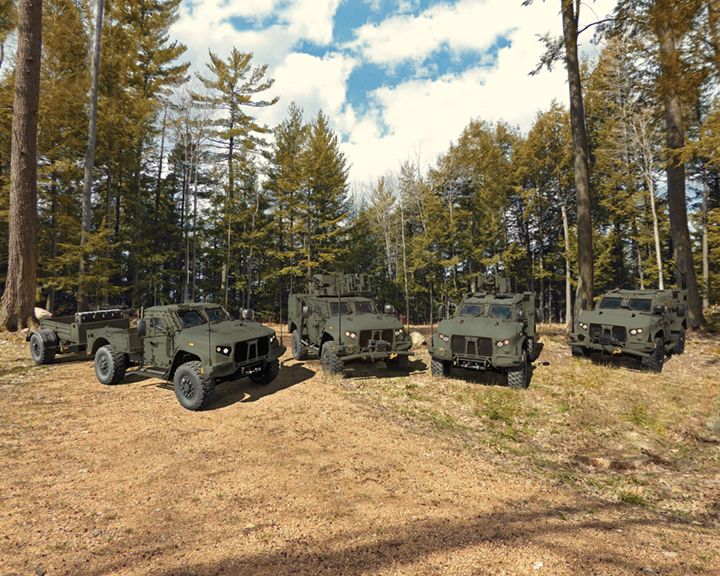 A small selection from the considerable range of JLTV configurations. (Photos: Oshkosh Defense)