Schiebel’s CAMCOPTER S-100 UAS is once again supporting coast guard operations in the Baltic Sea. Under a service offered by the European Maritime Safety Agency (EMSA), Finnish Border Guards are once again operating the UAS for littoral security and safety missions.

Operating from a coast guard station in Hanko, , the aircraft is supporting the Finnish authorities in carrying out Coast Guard functions, such as maritime border surveillance, search and rescue, monitoring and surveillance, ship and port security, vessel traffic monitoring, environmental protection and response, and ship casualty assistance, as well as accident and disaster response. The information collected from the onboard sensors is shared in parallel with other regional nations, allowing for a common maritime picture and more comprehensive coordination. The operations will continue until end of July.

The S-100 will execute these tasks equipped with an L3 Wescam EO/IR camera gimbal, an Overwatch Imaging PT-8 OCEANWATCH, a Becker Avionics BD406 emergency beacon locator and an AIS receiver. The deployment comes on top of two other CAMCOPTER operations for EMSA currently being carried out in Estonia and Romania, conducting maritime surveillance. It is also the third deployment for the Finnish Border Guard, following a trial in 2019.

Hans Georg Schiebel, Chairman of the Schiebel Group, termed the contract “Another great example of [the] enhanced maritime surveillance and information-sharing capabilities of our CAMCOPTER S-100. Since [the] contract began, we have conducted operations all over Europe.” 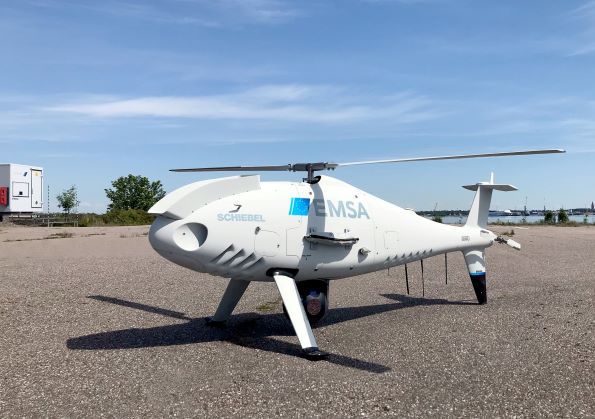 The S-100 continues to prove its efficacy in maritime security in multiple locations. (Photo: Schiebel)