As Mönch Training and Simulation Channel (MTSC) begins to flex its muscles and brings additional unique content to the training and simulation (T&S) community, we initiate a weekly interview column under the title “Words on Wednesday.” As that suggests, the object is to mount an interview with a T&S community luminary every Wednesday – make it a regular date in your calendar now!

Although the intention is to focus on every aspect of the training and simulation world – companies large and small, operators and users as well as developers and planners, academics and institutional players – the question as to where to start was easily solved on refection that what we want to do is look back and forwards at the same time: to put some context around the issue of where we are headed as an industry, as it were. Where better to start, then, than with CAE – a company that has transformed itself over the last ten years – and had a profound influence on the industry while doing so – becoming a training partner, not simply a provider of products and services.

That transformation is due in no small part to the leadership of CAE during that period – all the way from Marc Parent as President and CEO to the many (many!) programme managers and executives MTSC frequently interviews in various global locations. Gene Colabatistto, as Group President, CAE Defence and Security, has played a significant role in the journey the company has gone through and MTSC had an opportunity to speak with him in some depth at the Royal International Air Tattoo last year, celebrating the Royal Air Force’s hundredth birthday!

MTSC: Looking back a decade, how do you view the changes you – and the industry – have gone through between then and now?

GC: In 2008 it was defence budgets that shaped all our views. The value proposition was all about cost savings – how much could a user save in adopting a live, virtual and/or constructive solution. There was interest – but still a degree of scepticism regarding simulation. Decisions were being taken by ‘technology immigrants,’ and they were somewhat reluctant to adopt what they saw as ‘technology solutions.’ The Level D simulator in the civil world was pretty much the touchstone by which other solutions were measured.

Then we began to develop better visuals and databases: we began to apply modelling and simulation to mission training (which has turned into a major theme for today and tomorrow) and we began to overcome the countervailing forces. Simulation strategies in Canada, Australia and the United Kingdom lent weight to the progress being made in the United States and the demographics began to change around 2011-2012, bottoming out around 2014-2015.

What all that means is that it is the training task that is now the determining factor – not the budget. The ability to network has become far more important – 98% of our simulators are on networks now. Standards such as High Level Architecture (HLA) and the Common Database (CDB) are pervasive and fundamental, but it’s actually more important be able to connect the dots, rather than to make our own dots. We don’t necessarily want to cover the whole waterfront – we want to empower the user to make the best and most efficient use of our capabilities to enhance their own.

Our current situation in terms of the relationship with the majority of our users is that we are much more like a baseline defence system than we ever have been. We are now a solution provider, rather than just a component piece of the puzzle. The move towards greater immersion and more productive use of the technology stimulates us to do better – and to do it more efficiently and more cost-effectively. It’s worth remembering that effective trumps efficient, though – every time!

MTSC: So what is the next big step? Is there one, or is it a matter of incremental movement?

GC: Well – having reached the point at which there is now very little resistance to the use of simulation, we have essentially become part of the fabric of training – institutionalised, if you will. So the big debate right now is – how do we exploit this situation to improve the training enterprise – the whole nine yards? And the answer is to leverage technology and to apply it in a context-sensitive manner tempered with experience – what Ian Bell, our VP and General Manager for the Middle East and Asia-Pacific, calls “putting old heads on young shoulders.” That’s what we’re about – and we are doing it by enhancing the digital learning environment and by integrating training systems.

It works, what’s more. Look at the NATO Flying Training in Canada contract: we’ve increased output by 33% and gained a $450 million extension. Look at the US Army’s fixed-wing training contract. Governments have gained the confidence to be able to give the company a big piece of the action in the right circumstances – and that is win-win for all concerned. We are asking the customer to trust us with part of their core mission – and that requires a level of partnership that may well have been nearly impossible a decade ago. But we have invested in proximity to and affinity with the customer – in both the physical and the cultural world – forming and nurturing the partnerships that are becoming the lifeblood of CAE’s progress. We’re not here to vertically integrate – and we are very well aware that one size fits nobody. As a result, our contracts are becoming larger – and on a very significant percentage of them we are now prime – which wasn’t the case ten years ago. We are now competing directly with Tier 1A suppliers – and winning, because we have brought our ‘A’ game.

As anybody who knows him will attest, Gene sets the bar high for future interviewees – a frank and open assessment -concisely expressed – of some of the themes, developments and opportunities occupying the battleground over which we all toil daily. MTSC is planning a similarly stimulating series of interviews for the “Words on Wednesday” spot as time marches on. 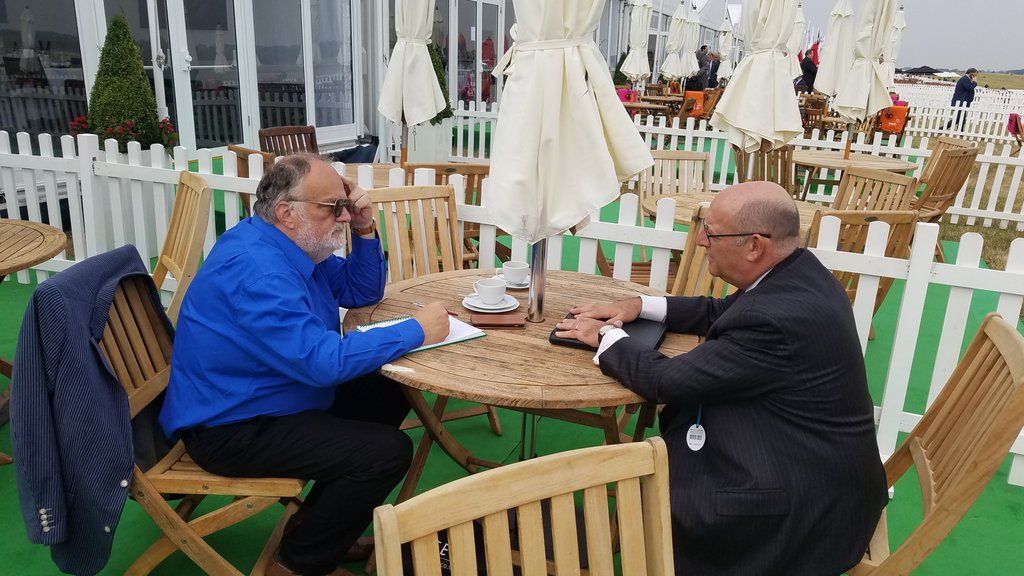