In advance of ITEC 2018, CAE gave MONCh the opportunity to visit German Navy’s facilities at Nordholz Naval Airbase, the home of Naval Air Command (Marinefliegerkommando), with the Naval Air Wing 3 (Marinefliegergeschwader -MFG- 3) and Naval Air Wing 5 (MFG 5), equipped with the P-3C ORION, RUAG Do 228NG, EC135, Mk88A Sea LYNX and Mk41 Sea KING, alongside the former mentioned systems’ simulators (except for the DO 228NG and EC135 platforms, which do not have simulators). Some 2,000 civilian and military personnel are based at Nordholz, with the wing providing surveillance & reconnaissance, anti-submarine search, SAR and pollution control operations.

Nordholz Naval Airbase will see the NH90-variant Sea LION helicopter brought into service by Q4/2019. Synthetic training is currently in the procurement process with CAE’s training bid similar to the company’s recent Qatar Emiri Air Force (QEAF) deal. The Sea LION simulator is being procured through the NATO Support and Procurement Agency (NSPA) in ccoperation with the German procurement agency BAAINBw.

Following delivery of the training centre facility and NH90 training devices in 2021, CAE will commence providing training support services, including classroom and simulator instructors. CAE will also design and develop a Tactical Control Centre to be used for managing networked mission training exercises.

The CAE 3000 Series NH90 FMS, which will be certified to Level D, “the highest qualification for flight simulators,” according to the company, will feature a range of CAE’s core simulation technologies, including: six degree-of-freedom electric motion system and high-performance vibration platform to replicate vibration cues critical to helicopter pilots; a high-fidelity CAE MEDALLION-6000XR visual system; and a direct projection 220×88-degree extreme field-of-view dome display. The NH90 simulators will also feature the Open Geospatial Consortium Common Database (OGC CDB) architecture, an international standard for the creation of synthetic environment databases. This common database software and standardisation will enhance synthetic environment database re-use and interoperability across the Qatar Armed Forces.

Speaking to MONCh in Nordholz, Commander Jan Keller of MFG 5 said they will not see a new simulator completed by the time the navy receives its first (of 18) Sea LION. He continued on stating that the navy is using the German Army’s NH90 TTH facilities to train its crew, alongside a possible use of Italy’s NFH simulator.

CAE has already supplied all of the simulator hardware for the German Navy’s fleet of Lockheed Martin P-3C ORION aircraft and Leonardo Sea KING and Sea LYNX helicopters in Nordholz.

In 2006, CAE was awarded contracts valued at approximately €10 million (C$14 million) to upgrade a P-3C operational flight trainer (OFT) for the German Navy. The Germany Navy acquired P-3C aircraft and the simulator from the Royal Netherlands Navy. As part of the German Navy’s P-3C Capability Upkeep Programme, CAE upgraded the simulator with new instruments, and software and hardware enhancements.

The future is unclear on what will replace the OPRIONs at one point, as the country plans to sign a letter of intent with France to jointly develop a new maritime patrol aircraft MPA. The “Maritime Airborne Warfare System,” the working title of the intended development programme, will replace the P-3C and the Breguet ATLANTIQUE 2, which are currently in service with the German and French Navies. One thing is for sure: The new aircraft will be based in Nordholz.

Moving back to rotorcraft, in May 2017, CAE completed a major upgrade on the Sea KING MK41 helicopter simulator ahead of schedule and re-entered it into service in Nordholz. CAE performed a range of significant updates, including the addition of the latest-generation CAE MEDALLION-6000 image generator with common database (CDB) architecture, upgraded avionics for concurrency with the current helicopter, enhanced synthetic and tactical environment simulation software, new vibration system, an improved instructor operator station and a new brief/debrief station.

The German Navy conducts a range of training tasks in the Sea KING FMS that were previously not possible, such as ship deck landings and night vision goggle training. 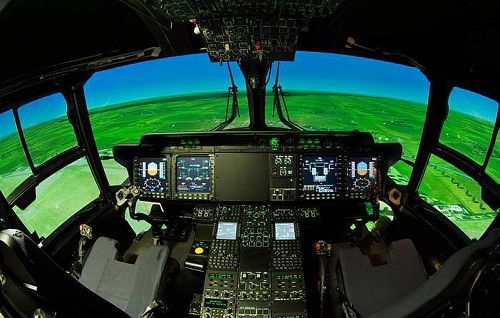