The Electronic Warfare (EW) landscape in the Middle East is influenced by three factors: Ongoing operations, the procurement of advanced Ground-Based Air Defences (GBAD), and the recapitalisation of EW capabilities; particularly in the air domain. On the eve of Tangent Link’s EW GCC 2018 conference and exhibition to be held in Abu Dhabi 8-10 October, we take the temperature of the region’s EW domain and examine the factors driving the market.

For many observers inside and outside the Middle East, ongoing operations in Syria have provided a window on advanced A2/AD (Anti-Access/Area Denial) capabilities which have proliferated in the region. Since Russia began its intervention in Syria’s civil war in September 2015, Moscow has pursued a twin track regarding its theatre A2/AD posture. This has focused on the deployment of advanced weapons and the accompanying deployment of Electronic Attack (EA) assets. Many of the kinetic capabilities have been well-documented by the general and specialist media.

However, two relatively new systems which had yet to be encountered by US and allied air forces are causing concern. These include the Almaz-Antey S-400 (NATO reporting name SA-21 GROWLER) high-altitude Surface-to-Air Missile (SAM) system and the KRET Krasukha-S4 ground-based EA platform. One S-400 defends Russia’s deployment at Khmeimim airbase on the northwest Mediterranean coast, and was deployed in November 2015. A second battery has been deployed to the city of Masyaf, also in the northwest.

The S-400 is a cause for concern not only for neighbouring countries and the wider region, but also for the US-led coalition performing its own air campaign against self-proclaimed Islamic State (IS, aka Daesh, aka ISIS). The system’s 40N6 active radar homing SAM has a range of circa 216 nautical miles/nm (400 kilometres).

The S-400’s 91N6E S-band (2.3 gigahertz/GHz to 2.5GHz/2.7-3.7GHz) ground-based air surveillance radar can potentially detect targets at a range of 324nm (600km), although depends where the radar is situated; range would potentially reduce, for example, if the radar’s line-of-sight is restricted by high terrain. Nevertheless, the S-400’s reported capabilities indicate that the system not only provides GBAD coverage above Syria, but also over much of the surrounding region.

The US-led coalition has yet to encounter the system in combat, despite performing a series of air strikes against suspected Syrian chemical weapons targets on 14 April. However, sources close to the air campaign have told MONCh that the Russians had chosen not to activate the S-400 during these attacks, for which they had received prior warning, amid fears that the coalition could have used this opportunity to gather valuable Electronic Intelligence (ELINT) regarding the S-400’s performance in a ‘real world’ scenario.

The seminal report Russia’s Electronic Warfare Capabilities to 2025: Challenging NATO in the Electromagnetic Spectrum by Roger McDermott, a senior fellow at the Jamestown Foundation think tank in Washington DC published in September 2017, paints an illuminating picture of some of the A2/AD EW systems Russia has deployed to Syria:

These include the KRASUKHA-S4 and KRET L-175V KHIBINY airborne EW system. The KRASUKHA-S4 provides X-band (8.5-10.68GHz) and Ku-band (13.4-14/15.7-17.7GHz) jamming against airborne radars. Mr McDermott’s report states that the KRASUKHA-S4 deployment was as much about protecting Russian assets at Khmeimim airbase from air attack, as it was about field testing the system in operational conditions. Few reliable reports regarding the L-175V have been released, with much bluster online concerning its capabilities against US and NATO aircraft. Nonetheless, the L-175V is thought to be capable of ELINT gathering and EA. Whether this is performed at the tactical level to protect the aircraft, and perhaps an accompanying strike package, or to perform theatre-level barrage and spot jamming in support of wider operational objectives remains unknown.

Beyond the deployment of advanced A2/AD systems to the Syrian theatre, concerns abound vis-à-vis the proliferation of similar A2/AD GBAD capabilities around the Middle East. The Stockholm International Peace Research Institute (SIPRI) has chronicled the proliferation of such weapons in the region over the past ten years. Iran, for example, has taken delivery of Almaz-Antey 9K331 TOR-M1 (NATO reporting name SA-15 GAUNTLET) medium-range Semi-Active Radar Homing (SARH) mobile SAM systems.

SIPRI stated that, between 2006 and 2007, Iran took delivery of 29 platforms in a deal worth $700 million. Furthermore, in the same timeframe, Iran procured Almaz-Antey S-300PMU-2 SAM batteries from Russia, buying four systems in 2015 with all four thought to have been delivered by 2016. These acquisitions are a cause for concern in two ways: Firstly, they extend the depth and breadth of Iranian GBAD, and secondly they indicate Tehran’s air defence direction of travel which appears to be a wish to acquire increasingly sophisticated GBAD capabilities.

Open source information states that 9K331 TOR-M1s are capable of engaging two air targets simultaneously and are equipped with electronic counter-counter measures, with a maximum engagement altitude of 20,000ft (6,000m) and a range of 6.5nm (12 kilometres). Such a platform is a threat to aircraft performing low-altitude attacks on point targets. The S-300PMU-2 meanwhile, is capable of engaging targets at ranges of up to 105.3nm (195km) using their 48N6E2 SARH SAMs while the system’s 64N6E2 S-band radar has a detection range of up to 150nm (277.8km) for a fighter-sized target. Used together to protect key installations, the S-300PMU-2 and the 9K331 TOR-M1 are potent adversaries with the S-300PMU-2 potentially forcing combat aircraft to fly at comparatively low altitudes to shorten their detection time by the 64N6E2. This in turn could force these aircraft into the engagement envelope of the 9K331 TOR-M1.

On one hand, both systems are comparatively old having debuted with the Russian Armed Forces in 1997 (S-300PMU-2) and 1991 (9K331 Tor-M1). That said both are treated by the US and her allies with a healthy dose of respect with NATO gaining familiarity with a Slovakian Air Force S-300PMU system during the 2005 Trial Hammer combat exercises involving France and Germany. Moreover, a Georgian 9K331 TOR-M1 system obtained by that country from Ukraine was credited with downing a Russian Air Force Tu-22MR (NATO reporting name BACKFIRE) reconnaissance aircraft in 2008 during the South Ossetia War.

While both the S-300PMU-2 and 9K331 Tor-M1 maybe considered legacy systems, they retain the potential to act as A2/AD weapons. Finally, it must not be discounted that Iran may try to procure the S-400 (see above) which could have serious implications for the air power balance in the Middle East.

In EW terms the threat posed by the A2/AD weapons addressed above can be mitigated through the planning and execution of comprehensive SEAD (Suppression of Enemy Air Defence) efforts during any future conflict, alongside the organic capabilities already equipping combat aircraft in the form of their Self-Protection Systems (SPSs).

Both the execution of a successful SEAD campaign, and the safeguarding of combat aircraft depends on the timely and comprehensive collection, management and sharing of ELINT to derive an electronic order-of-battle. The collection of ELINT depends in a large part upon aircraft equipped to this end. A small fleet of ELINT-gathering planes are fielded by members of the Gulf Cooperation Council (GCC). These represent an important capability. Similarly, modest kinetic SEAD capabilities are found amongst the GCC membership in the form of Raytheon AGM-88B/C HARMs (High-Speed Anti-Radiation Missiles) which could be effective against the ground-based air surveillance and fire control radars encountered during any future conflict in the region.

Efforts are ongoing to enhance the region’s SEAD/ELINT capabilities. Important procurements of ELINT aircraft have been witnessed over the past two years along with the potential advent of the Lockheed Martin F-35A/B/C LIGHTNING II fighter in the region, thanks to interest shown therein by some GCC members. When teamed with the Northrop Grumman AGM-88E Advanced Anti-Radiation Guided Missile (AARGM) air-to-surface weapon, this aircraft/missile combination represents a robust SEAD asset thanks to the missile’s high performance, and the F-35’s low radar cross section.

One area of investment which GCC members may consider in the future is the procurement of an EA platform. The nations currently retain the capability to collect ELINT, but little in the way of operational-level jamming, beyond the RF jamming systems routinely carried on combat aircraft as part of the their SPSs.

Perhaps the most suitable option would be the Boeing EA-18G GROWLER EW aircraft. This platform equips the US Navy and Royal Australian Air Force, and carries the Harris AN/ALQ-99 Tactical Jamming System. This can perform spot and barrage jamming against hostile radars, and is also thought to be capable of jamming Very High Frequency and Ultra High Frequency communications. The AN/ALQ-99 will be replaced early next decade in US Navy service with the Raytheon AN/ALQ-249 Next Generation Jammer, which will also equip the US Marine Corps’ F-35B aircraft.

The acquisition of a platform like the EF-18G equipped with the AN/ALQ-249, coupled with the acquisition of the F-35/AGM-88E combination could provide the region with a robust SEAD capability, particularly when teamed with existing ELINT assets. Such a capability should more than offset the A2/AD strategies and procurements being pursued by other actors in the Middle East region. 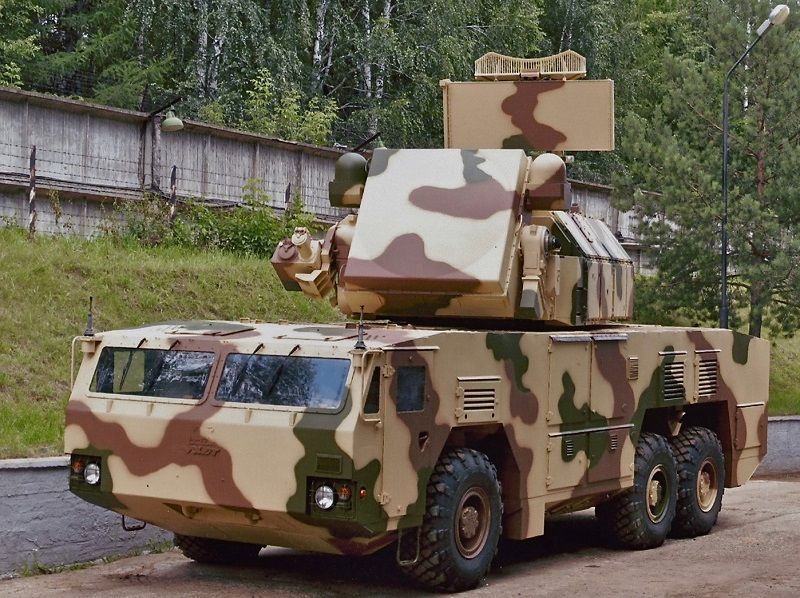