The Bundeswehr has inked a seven-year framework contract with Rheinmetall that envisages delivery of up to 130,000 laser light modules (LLM) to the German armed forces. Initially, 2,460 devices (€3 million) will be delivered. The overall contract – valued at up to €178 million – is the largest order for laser light modules ever booked by Rheinmetall Soldier Electronics of Stockach. The framework contract is initially set to run for seven years and deliveries will commence this year.

Because the devices can be mounted via a standard inferface onto all assault rifles, submachineguns, machineguns and sniper rifles currently in the Bundeswehr inventory, they will greatly improve nightfighting capabilities. The Bundeswehr will initially take delivery of 360 devices earmarked for integrated verification management, to be followed by the remaining 2,100 laser light modules now on order.

The device selected is a version of the latest-generation LLM-VarioRay. Intended primarily for small arms carried by those who fight on foot, it is used for detecting, identifying and marking targets. Weighing around 250g, including bracket, the LLM-VarioRay can be mounted on any assault rifle with a MIL-STD 1913 rail/STANAG 4694, and operated via a trigger cable. It features a powerful white lamp, a red-light laser marker, an IR laser marker and an electrically focusable IR illuminator. The light source can be selected with a rotary switch and is infinitely adjustable. It has a fully-integrated, factory-aligned laser block, enabling easy adjustment and alignment of the aiming device and weapon. Together with night observation and thermal imaging devices, it allows German troops to conduct a full range of operational missions, 24/7 and in all weathers.

The LLM-VarioRay product family forms part of the IdZ-ES German soldier system, and is also in service with the British Army (which calls it the Laser Light Module MK3), and with the Swiss Army (Laser-Licht-Modul 19). 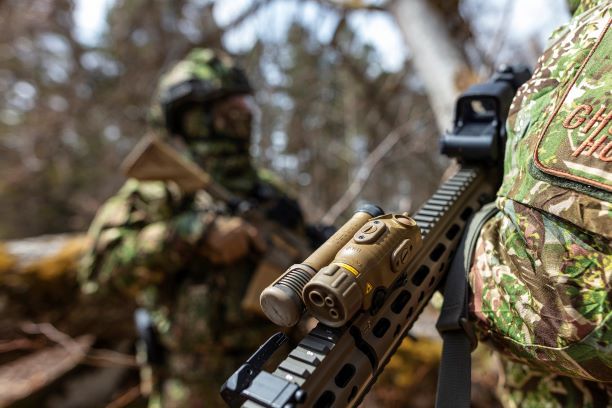 The LLM VarioRay at the ready. (Photo: Rheinmetall)