“At a time of growing threats and increasing competition in the High North, we have some of the closest cooperation with our Danish, Swedish and Norwegian partners […] We work together annually on military exercises and operations, learning from each other and strengthening our partnerships […] Our ability to operate in this way is the firm foundation of our shared resolve to stand up for our values,” he stated.

Denmark and Sweden are both members of the UK-led Joint Expeditionary Force (JEF) – 10 nations working together to deliver forces at high readiness, across a range of roles, complementing NATO and European security. During the visit, the Defence Secretary met ambassadors from the JEF nations to discuss co-ordination of members in response to grey-zone threats.

During a visit to Arvidsjaur in Swedish Lapland, the Defence Secretary met personnel from the newly re-established Norrland Dragoon Regiment, which focuses on arctic warfare: the UK hopes to learn from its northern partners to strengthen its own capabilities in this domain. London’s recent Integrated Review and Defence Command Paper set out the UK’s commitment to the High North, which represents a series of significant defence challenges. 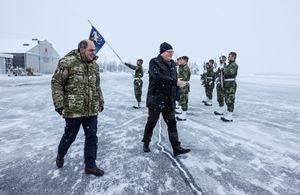