London’s Investment Could Rise to £230 Million

The United Kingdom and Japan have announced plans to jointly develop a jet engine demonstrator appropriate for their respective Tempest and F-X next-generation fighter aircraft programmes.

In a 22 December statement, the MoD in London said that work on the joint engine demonstrator, to be led by national air propulsion specialists IHI Corporation and Rolls-Royce, will kickstart early in 2022, with the UK set to invest an initial £30 million (€35.5 million) in “planning, digital designs. and innovative manufacturing developments”.

The ministry added that a further £200 million in UK funding is expected to go towards developing a full-scale demonstrator power system, supporting “hundreds of highly skilled jobs, including many at Rolls-Royce’s Filton facility in Bristol”.

It also noted that Britain will be investing over £2 billion in the international endeavour to design the Future Combat Air System (FCAS) – expected to combine a core aircraft, often referred to as Tempest, at the heart of a network of wider capabilities, such as UAS, sensors, weapons, and advanced data systems to form a next-generation capability expected to enter service from the mid-2030s. Tempest is being positioned to replace the RAF’s Eurofighter Typhoon.

In parallel, through its F-X programme, Tokyo is looking to develop a future fighter aircraft to a similar timescale to replace the JASDF’s Mitsubishi F-2 fighters. Japan is also working with the US in this endeavour, particularly with Lockheed Martin, and has been seeking additional partners to work on individual parts and sub-systems for the aircraft, including avionics.

In this regard, London revealed that a Memorandum of Cooperation was also recently signed to enable Japan and the UK to pursue joint technologies and explore the feasibility of further sub-systems collaboration throughout 2022. In the UK, this work will be undertaken by the Team Tempest industry partners: BAE Systems, Leonardo UK, MBDA UK and Rolls-Royce, while in Japan it will be led by MHI.

UK Defence Secretary, Ben Wallace, said that this commitment with Japan is a clear example of London’s revised Indo-Pacific policy, which sees strengthening partnerships in the region as a “strategic priority”. Britain is also supporting Japan in the delivery of the Joint New Air-to-Air Missile (JNAAM) capability.

The latest developments come after the UK signed an MoU in 2019 with Italy and Sweden to collaborate on future combat air systems and technologies. 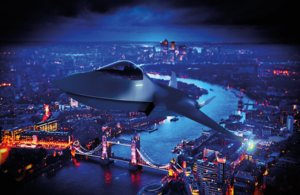 A rendering of the Tempest aircraft. (Image: UK MoD/Crown copyright)