The pandemic-inspired economic crisis and the consequent reduction in Brazil’s defence budget requires some re-evaluation of the strategic projects launched by the armed forces in recent years. High on the list is the KC-390 MILLENIUM airlifter, of which the Brazilian Air Force (FAB) currently has 28 on order.

For these reasons, the FAB is in the process of re-evaluating the potential routes to meeting its budgetary goals while at the same time meeting the requirements of current threat and operational scenarios. The principal problem with the KC-390 is that the costs for 28 aircraft prove to be higher than the actual available budget – both in acquisition costs and in sustainment over time. A ‘final’ number has not yet been determined as far as how deep a cut in production numbers will be – but Brigadeiro-do-ar Carlos Baptista Jr, the FAB commander, has stated that the contract already stipulates the potential for a reduction to 21 airframes, and that his intention is to renegotiate the programme to “a number between 13-16 aircraft.”

A recent FAB statement highlights the fact that the current KC-390 fleet has provided exceptional availability, resulting in far higher capacity and agility, in terms of transporting cargo and personnel, than had been anticipated – factors that have been closely observed during operations in 2020 and 2021. Ironically, producing a capable aircraft that delivers on performance may prove to be a double-edged sword for Embraer.

Baptista confirmed, however, that this will not have a direct impact on programme costs for Embraer: these were shared between the FAB and the company, with the FAB having already paid its share. A series of budget analyses and studies began in 2019 and are now being assessed in line with current legal provisions to inform the Aeronautical High Command’s decision regarding the contract negotiation process with Embraer. 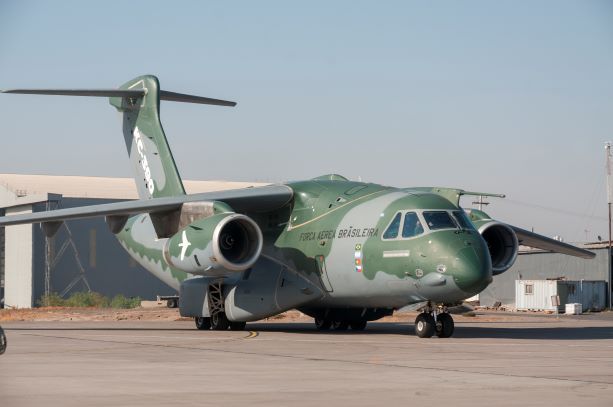 The reduction of the KC-390 order could amount to over 50 %. (Photo: Santiago Rivas)