The Força Aérea Brasileira (FAB) received its first Airbus A330-200 at Galeão Air Base (Rio de Janeiro) on 26 July. Two aircraft have been purchased from Azul Linhas Aéreas, marking the return of transport capacity for long-range missions.

Designated KC-30, the two aircraft were purchased in April for $80 million, with deliveries specified at 90 and 180 days. The first as overhauled and painted in Jordan prior to delivery to the 2º/2º Grupo de Transporte at Galeão AB. A delivery date for the second has not yet been confirmed.

In a further contract, yet to be signed by Brazil, the aircraft will undergo conversion to the Multi-Role Tanker Transport (MRTT) standard, work that is expected to be carried out by Airbus in Spain. The MRTT can carry up to 45t of cargo; up to 130 stretchers; or have a mixed configuration carrying 40 stretchers, 20 medical staff, life support equipment and 100 passengers; or 300 passengers. For REVO missions, the aircraft carries up to 111t of fuel using internal tanks.

This versatility enables features such as supporting the displacement of four Eurofighter Typhoons over a distance of 5,794km, refueling them in flight. Carrying 20t of cargo, the same mission could be conducted over a 4,500km range. An MRTT can loiter at a fixed point 1,600km from base for 4h30 and deliver 50t of fuel in flight: halving the standoff distance to 800km means up to 5h on standby and 60t of fuel transferred.

The detailed nature of the conversion has not yet been revealed: neither have any detals on timelines or contract value. 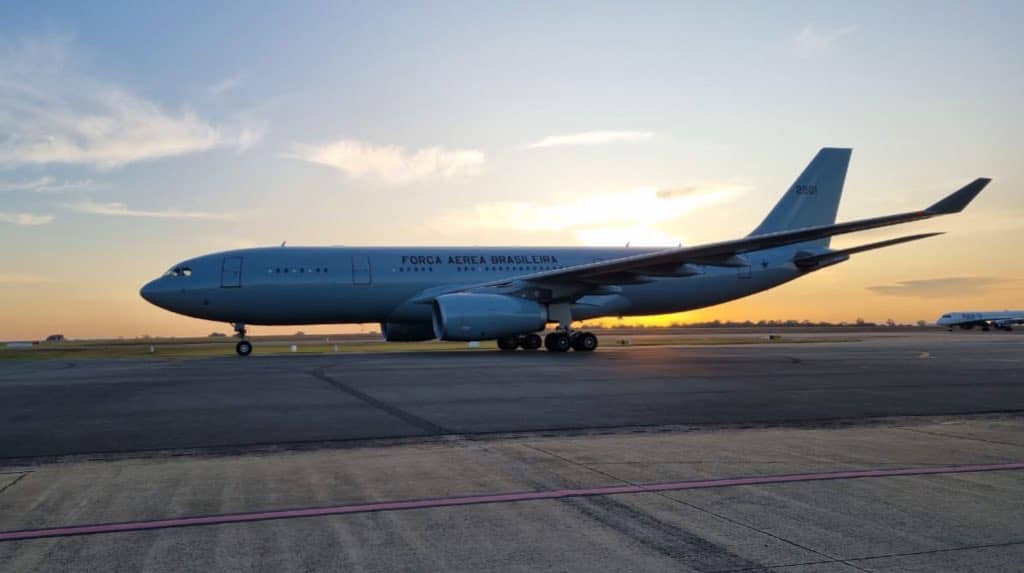 Arrival of the first A330 begins the FAB’s return journey to a strategic transport capability. (FAB)