IACIT RMT 0200 in Operation and Ready for Export

In operation since July at CEMADEN [the National Monitoring and Alerting Centre for Natural Disasters], the system is now available for series production and export. It detects, monitors and classifies the formation of severe weather events at long range, generating accurate, real-time data to accelerate response and decision-making timelines. CEMADEN, for example, uses early warning of severe rainstorms to facilitate the advance planning of preparatory actions. Storms in the summer period, which form very rapidly and cause tremendous damage, can only effectively be detected by dedicated weather radars.

The radar currently covers an area some 400km in radius, housing 20 million people, of whom two million live in high-risk areas. The radar’s dual polarisation allows formation and evolution of hydrometeors inside clouds to be monitored – it measures the volume and size of water droplets, hail, or ice crystals. With a user-friendly interface, the system provides clear data and images of various weather phenomena, enabling meteorologists to analyse large volumes of information with greater speed and precision.

The RMT 0200 can also be applied to a variety of other applications, including military, air traffic control, resource management and R&D, contributing in each to improved situational awareness and supporting more assertive decision-making, thus protecting lives and resources.

“The system IACIT has developed goes beyond the sensors themselves. It has an additional software layer to the radar, which generates automatic early warnings for a variety of scenarios. Thus, the radar can be useful both for institutes and centers which have their meteorologists and their own warning systems, as well as for operational bodies and companies in need to receive warnings automatically,” explained Ing. Gustavo de Castro Hissi, IACIT’s Director of Marketing and Sales. The system’s design allows high volumes of data to be processed according to predefined parameters, resulting in automatic alerting. It also integrates a software platform which allows set-up, monitoring and control too be conducted remotely.

IACIT is the only Latin American company to manufacture such a system. “Typically, weather radars operate on tube systems. IACIT brought […] defence radar technology to the RMT 0200. Its amplification system is totally based on a gallium nitride (GaN) transistor, which guarantees a huge useful life and a very low failure rate,” Gustavo explained. The use of solid-state technology enables pulse compression technology to be applied in signal processing, so less peak power is applied in transmission. This ensures lower energy consumption, less noise and less electromagnetic pollution.

The emitted beams feature dual polarisation – horizontal and vertical – so the RMT 0200 can classify and measure both dimensions of the monitoring phenomena, including detection of all manner of severe weather conditions and impending events. 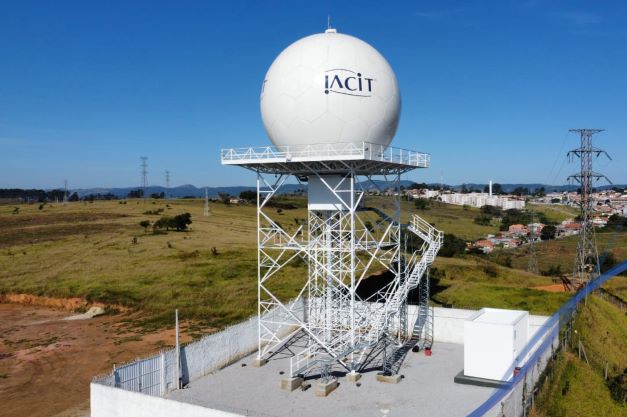 IACIT’s RMT 0200 has been operational at CEMADEN since July. (Photo: IACIT)