Embraer and the Brazilian Army jointly showcased the SABER M200 VIGILANTE radar on 10 December – the system was jointly developed with the Brazilian government as a support both for national air defence and for Embraer’s export drive for integrated defence systems.

“Over more than 15 years of joint work, the synergy between the Brazilian Army and Embraer has made it possible to achieve Brazilian autonomy in the development of technological capability of the native digital radars. The new radars are made with phased array technology, which will expand our troops’ capabilities, as well as maintaining the ongoing operation with the support of our Defense Industrial Base (BID),” commented Gen Guido Amin Naves, Head of the Army’s Department of Science and Technology (DCT).

“[…] through Embraer’s engineering capabilities and complex project management processes, we were able to overcome several technological challenges alongside the Army throughout [the system’s] development. The adoption of the radar and the start of operations by the Land Force will be important for validating the solution aiming future exports,” explained Jackson Schneider, President and CEO of Embraer Defense and Security.

The new radar joins other developments in the family of Brazilian radars, such as the SABER M60 air surveillance radar and the SENTIR M20 ground surveillance system in use in Brazil’s SISFRON border monitoring system. Still under development is the SABER M200 multi-mission radar, which is dedicated to medium-altitude air defence applications.

The efforts made by the Army and Embraer have been supported by the BID and various development agencies, including contributions from the Financier of Studies and Projects (FINEP) and the National Bank for Economic and Social Development (BNDES). 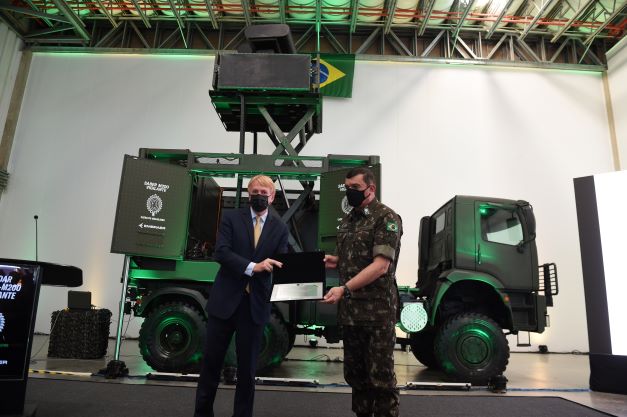 The jointly-developed radar as unveiled on 10 December. (Photo: Claudio Capucho via Embraer)