When it comes to vertical lift, Boeing has some historic names to offer: CH-47 CHINOOK; AH-64 APACHE, AH-6 LITTLE BIRD; and the V-22 OSPREY. As if that is not sufficient, there is also the MH-139 for the US Air Force (USAF) and the whole topic of “future vertical lift.”

Vertical lift is essential capability on the battlefield, but there is never enough available. Helicopters are often referred to as ‘live savers’ as they perform the critical, though dangerous missions, of Combat Search and Rescue (CSAR) and Medical Evacuation (MedEvac), as well as transporting Special Forces (SF) to and from operational locations.

Boeing’s rotary-wing aircraft are built in Mesa, AZ and Philadelphia, PA. To date, more than 2,000 platforms are in use with over 20 nations around the world.

The current CHINOOK model is the CH-47F, offering a redesigned airframe, more accurate handling and quicker pilot decision-making, reconfigurable interior cabin, triple cargo hooks among other features. It also has a CAAS cockpit, DAFCS and a machined airframe.

The Canadian CH-147F has extended range, upgraded electrical system and DIRCM countermeasures on top of that, while the MH-47G also features extended range, an increased maximum weight and avionics upgrades. Four to six aircraft are produced each month, with a peak of 15 per month possible. The US Army is planning to operate the CHINOOK at least until the late 2060s – which will make it a centenarian, since the original model flew for the first time in 1962.

The tandem rotor that is such a hallmark of the CHINOOK has several advantages: 100% of the power goes to lift; increased stability in high winds; higher centre of gravity limits; easier loading/unloading; lowest downwash of any large helicopter; and more effective high altitude operations. Over 900 CHINOOKs are in operation with 19 countries, including eight NATO members.

The CH-47F has 53 seats, a winch to handle pallets or act as a rescue hook and a removable aft pylon to facilitate transport so that it will fit into a C-17 GLOBEMASTER III – an operation that can be achieved in 4-6 hours thanks to quick release connections and couplings.

The Block II version will feature new advanced rotor blades, for which the first tests have been completed, with a contract for the next step expected soon. There will be three further test aircraft, with flight tests beginning in 2019 and service availability in 2020-21. It will feature additional lift of 1,500lbs to meet a US Army requirement, though more may be possible. The Block II will also receive airframe modifications (aft section, pylon and nose section), a new drive system, a single section fuel tank with more capacity (as well as external replaceable pump and new composite pods) and an enhanced electrical system and greater range. It will have a high degree of commonality with the CH-47/MH-47.

Beyond Block II, Boeing is planning to introduce an improved engine, an active parallel actuator system (an option from 2020) and a torque management system. Block II just passed its milestone in April; Milestone C will follow in 2021 and Block II delivery from 2023, with Initial Operational Capability (IOC) and perhaps export availability in 2025. Every Block II is a retrofit to an existing CH-47F and the ambition is eventually to have 542 H-47G/F Block II in the US Army. So far some 473 CH-47Fs are planned, with 363 already flying. The Block II decision point for the US Army is coming up soon, with a Block III decision point in about 2025 and IOC planned for 2035.

There is a three-year lead time for deliveries of CHINOOKs right now: provided there are no major alterations or modifications required. The Netherlands is in line to receive 14 more aircraft (or upgrades) with a Honeywell cockpit and Israel is looking at modernisation of its fleet and possible replacement of the CH-53s. India will begin receiving its 16 CH-47Fs later this year.

Germany is contemplating replacing it CH-53GA/GS with 40 CH-47 CHINOOKs or Sikorsky CH-53Ks. The German Air Force (Luftwaffe) would like to increase that number to 60, budget permitting, but a requirement has yet to be issued – despite its having been predicted for the end of last year. 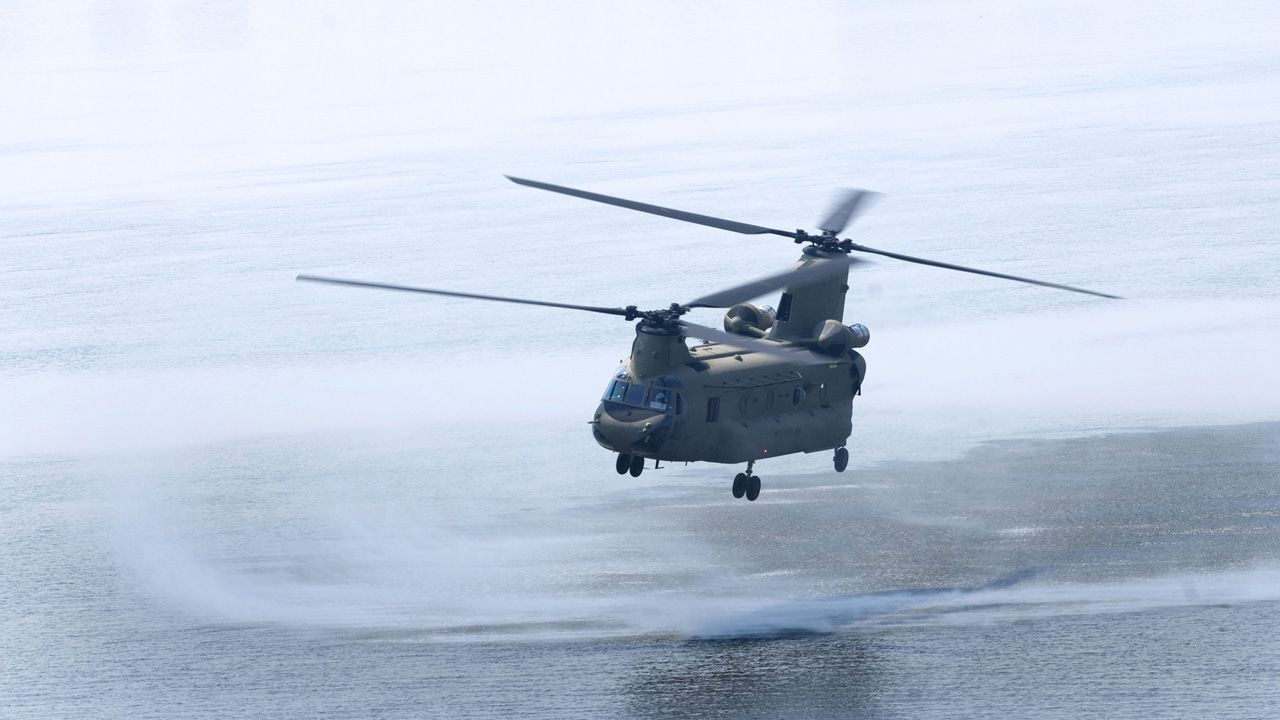 Over 320 OSPREYs are operating worldwide, with orders of 360 for the US Marine Corps in the assault and special operations forces (SOF) roles, 52 for USSOCOM for long-range SOF and contingency operations) and 48 for the US Navy for sea based logistics, personnel recovery and special warfare. Japan was the first international OSPREY sale in 2015 and last year Germany showed interest for the CSAR mission, with a possible requirement for 12-16. Possibly combining this requirement with the Navy’s need to replace its SEA LYNX fleet could make for a more viable procurement and a better solution for the variety of missions in which time is critical.

“It has revolutionised the way the USMC is operating. It offers a carrier onboard delivery (COD) or air-to-air refuelling for other airplanes (V-22 aerial refuelling system VARS), and is delivering these capabilities faster and further than other helicopters,” Boeing stated during its annual media tour. “So, for example, CSAR can be conducted in a bigger radius and faster to get your soldiers out. In the future it also should supply the heavy F-135 engine modules to ships on missions to keep the F-35 flying.”

Future mission capabilities or upgrades include: C2, Aerial Tanker, Weapons (nose weapon, rocket carrier, no requirements yet set), Reconnaissance/Surveillance, Airborne Early Warning, Costal/Border Control (all already in the development phase), or advanced weapons, extended range or Electronic Warfare (EW). Part of the future upgrade will be the inlet basic filter system, to keep out dust and sand. The US Navy is also checking the possibility of an anti-submarine version, possibly achieved with a modular kit, which is a solution being examined for a number of upgrades. The OSPREY can take up to 33 combat troops and has two thirds the volume of a CHINOOK. The USMC is planning to use the V-22 at least until 2040/50. Work share is 50/50% between Bell and Boeing. 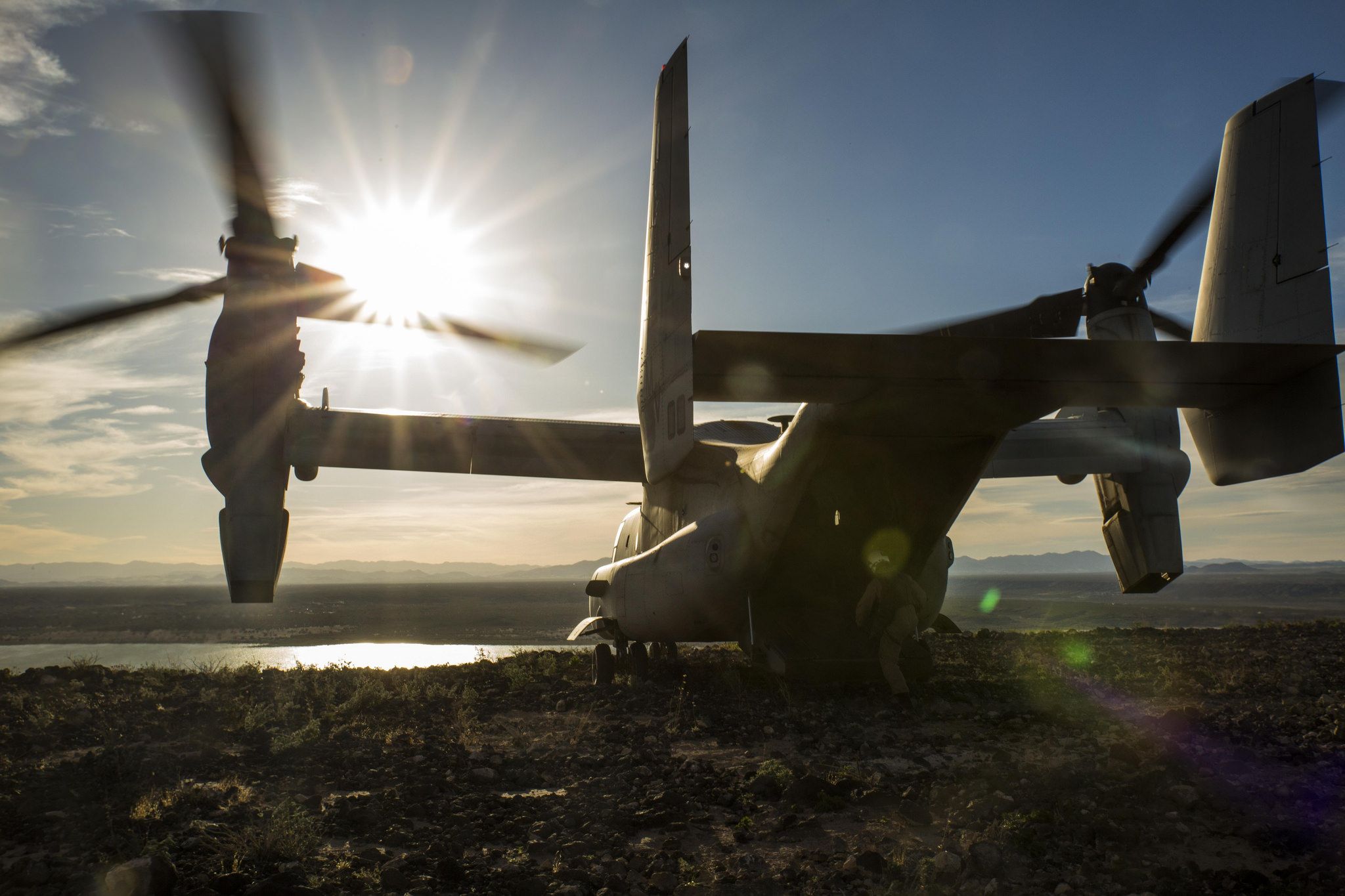 Boeing will offer the MH-139 for the USAF’s UH-1N replacement programme, with 84 UH-1Ns, built in the 1970s, to be replaced by 62 new aircraft for security support missions. Based on the Leonardo AW169, the MH-139 offers a very low life cycle cost. A contract from the USAF is expected in FY2018 with an in-service requirement for 2021-22. 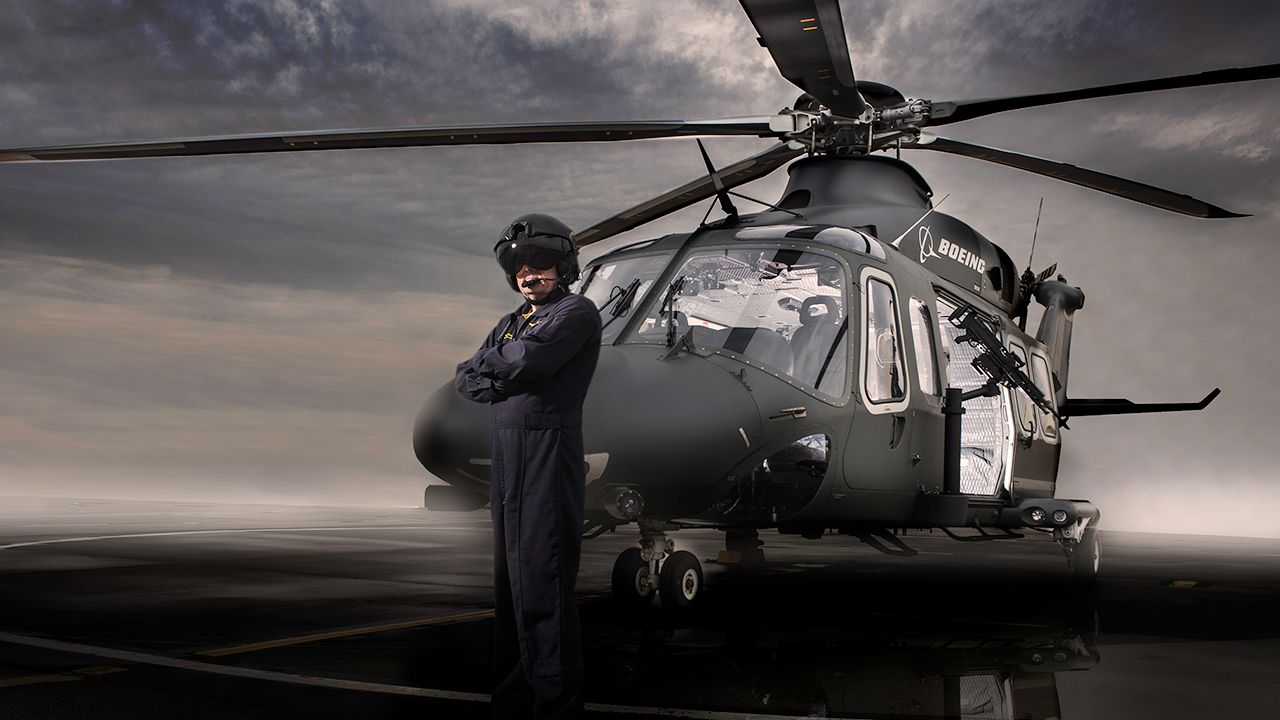 Australia is contemplating stepping out of the TIGER programme and has started talking to Boeing about buying AH-64s. According to the financial plan, the first APACHEs could be delivered in 2021-22. In March there was a MUM-T demonstration in Australia, to demonstrate what information could be provided in the cockpit. Latest customers for the type are South Korea (36 under contract), Indonesia (8 planned), India (22 planned), Qatar (24 planned) and the UK has just signed for 38 modernised versions for delivery in 2024, bringing the total to 50 by then. Production is currently eight per month, but could be a increased.

The AH-6 LITTLE BIRD will bring the newest features from the AH-6J and the APACHE. It will be configurable for Light/Precision Attack, Anti-armour, Close Combat Attack, Reconnaissance, Command and Control, Security & Escort, Counter-terrorism, Troop Insertion / Extraction and Combat Search & Rescue missions. It can be equipped with the M-134 Mini-gun (7.62mm), .50 cal GAU-19B (12.7mm), M260 7 round Rocket Pods (70mm) and Semi-active Laser (SAL) HELLFIRE missiles. Delivery will start next month to the first, customer Saudi-Arabia with nine of th total order of 24 scheduled to be delivered.