Boeing‘s F-15 may be very old, but the current model coming out of production is a whole new generation: It offers a significant higher payload, better persistence and performance. Production is planned up to 2019 and beyond. According to Boeing, “nothing flies faster, can carry more, or goes higher!” (Technical data: 2.5 Mach max. speed, 70,000ft max. ceiling, 2,600NM range (without refuelling), max. takeoff weight 81,000lbs, max. weapon load 29,50 lbs and max. load factor 9.0G’s.)

To keep it relevant constantly new technology and sensors are implemented, e.g. AESA radar, digital electronic warfare (EW), 4th gen technology, and an advanced crew station …a lot of the technology is coming from the Advanced F-15.

F-15 ADVANCED EAGLE production started September 2011 and also offers a new sensor suite. Some of the new F-15s also have conformal fuel tanks, with two more weapon stations. The new F-15 can integrate new sensors and effectors much faster and cheaper than “stealth” airplanes. At the moment, 1.5 airplanes are produced per month, that could be easily increased, according to Boeing.

The current outlook is: Saudi 84SAs (deliveries will go up to 2019), another customer is about to complete deliveries this year, as well as up to 72 aircraft for another customer in the Middle East (state department just cleared Qatar for 72 F-15s). The next customer coming up will get the new advanced F-15 cockpit.

According to Boeing, the F-15 is the only air superior aircraft in the US still in production – as long as the F22 production will not be restarted.

The 230+ F-15C’s can easily expand their life time up to the mid 2030 to bridge to the PCA (Penetrating Counter Air) for the cost of U$1 million, instead of upgrading the whole air frame for up to $40 million. There are around the same numbers of F-15E flying. Boeing stated: “The F-15 is combat proven, is in production and low cost!” And it will have a long future. 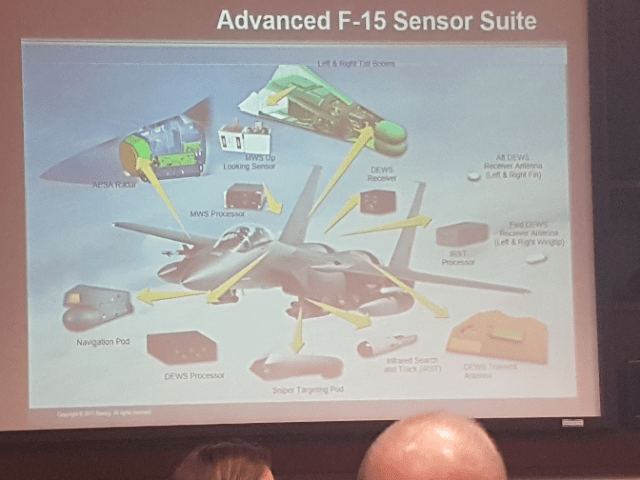