Intentional Messages to the Region

The largest-ever international air force exercise in Israel is now under way – Blue Flag – an exercise that regional air forces and defence staffs are watching with great interest.

According to official statements, the exercise is aimed at mutual learning of combat techniques using a mix of aircraft. But Israeli defence sources say this time it is being conducted with one eye on the growing influence of Iran on countries in the Middle East and the Gulf.

A former IAF base commander, Miki Bar, explained that such exercises have very important operational impact for all participants. “The fact that different air forces can work closely together, the exchange of operational intelligence and the use of a base in another country when this is needed, are the main benefits of such an exercise: […] on top of that, [it] is clearly a power show – that is no less important.”

The exercise is being held just days after Saudi Arabia announced it has reached an agreement with Iran on restoring full diplomatic relations. Sources say that Iran is moving fast towards a situation in which it will have various military stationed in Syria and Lebanon. “Another very worrying development is the closer relations that are being built between Iran and Saudi Arabia. The kingdom feels that it was deserted by the US and wants Iran as a new ally,” MON was informed.

With all these development in the background, the Blue Flag exercise began on 17 October and will continue over 12 days, with the participation of seven air forces (France, Germany, Greece, India, Italy, the UK and the US) as well as the IAF as host. An IDF spokesperson stated the exercise goal is to strengthen strategic international cooperation through shared learning about the integration of fourth- and fifth-generation aircraft in complex operational scenarios, with a focus on broadening and enhancing the operational capabilities of the participating forces. Throughout the exercise, the participating forces will drill air-to-air and air-to-ground missions, practice advanced defensive measures and conduct joint tactics against a variety of threats using advanced technologies.

The international flavour is worthy of note: the first deployment of a British fighter squadron in Israel since the foundation of the nation and firsts for Indian MIRAGE and French RAFALE squadrons also.

IAF commander, MGen Amikam Norkin, stated that threats to Israel from the Gaza Strip, Lebanon, Syria, and Iran are only increasing. “Holding an international exercise in this current reality, while continuing our overt and covert operational activities on all fronts, is of utmost strategic importance and has an extensive impact over the Israeli Air Force, the IDF, and the State of Israel. This exercise is groundbreaking in terms of technology, quality of training, and the number of participating nations. It illustrates the partnership and strong bond between the nation’s air forces and acts as a stepping-stone toward regional and international cooperation.” 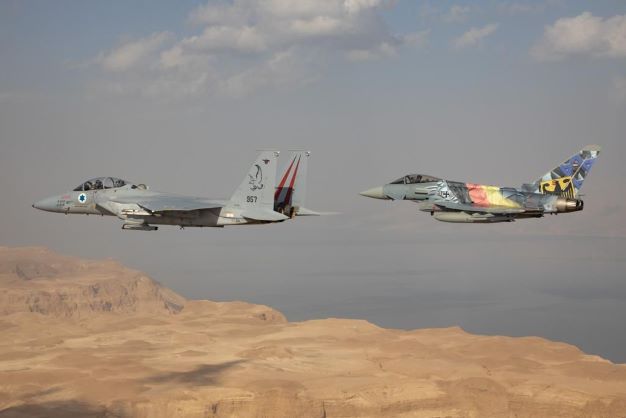