The US Army has contracted BAE Systems to sustain and support the Armored Multi-Purpose Vehicle (AMPV), the company announced on 8 July.

Valued at $600 million (€506 million) over the next five years, the contract calls for support and sustainment across the entire AMPV fleet, currently consisting of five variants aimed at execution of a broad set of missions while operating in the battlespace. BAE Systems is currently in low-rate production of AMPV and has produced at least one of each variant. The sustainment contract allows for capability and technology insertion throughout the vehicles’ anticipated service life. It also establishes the company as the sole-source provider for sustainment system and technical support, and for post-production sustainment and support for the programme.

“The AMPV family of vehicles will bring unmatched capability to the battlefield, and has demonstrated outstanding survivability and force protection as well as flexibility and growth for the future […]This contract award will not only support production, but it will also allow for future upgrades through the development and integration of new capability sets onto existing variants,” explained Bill Sheehy, the company’s AMPV Program Director.

The all-new AMPV is the first tracked combat vehicle built from the ground up for the US Army in over two decades. The highly-survivable, mobile family of vehicles addresses the critical need to replace the M113, and provides significant improvements in power, mobility, interoperability, and survivability for the Armored Brigade Combat Teams over legacy vehicles.

Variants include: the General Purpose vehicle; a Mortar Carrier; a Mission Command variant; a Medical Treatment vehicle; and a Medical Evacuation model. The AMPV is poised to execute today’s missions while adapting evolving technologies through its built-in space design, the company says, including an ability to enhance power generation to cater for future electronic and network connectivity improvements. 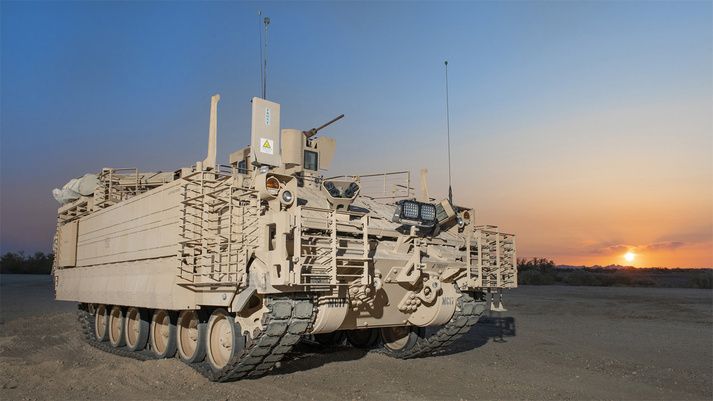 The AMPV purports to be about as ‘future-proof’ as a modern armoured vehicle can get, given the speed of technological evolution. (Photo: BAE Systems)